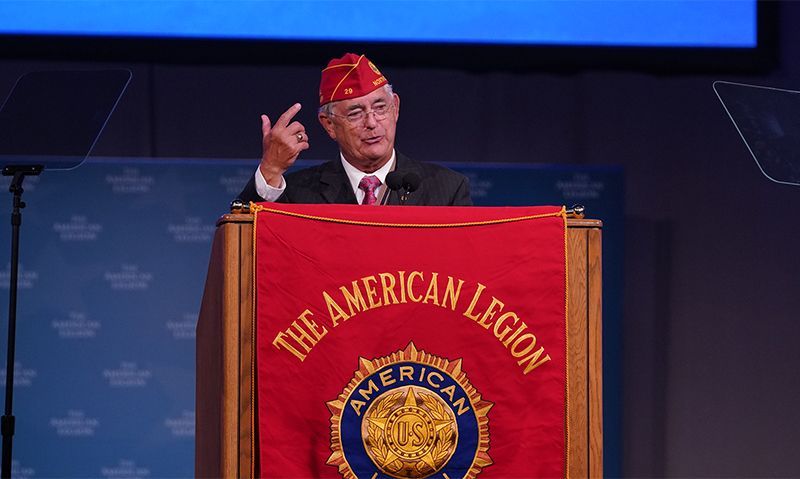 As the last U.S. troops left Afghanistan one day earlier, bringing an end to a 20-year war, American Legion National Commander James W. “Bill” Oxford had a message for veterans of that war.

“To all of America’s Afghanistan veterans I say, ‘thank you for your noble, historic and heroic service there. You have kept us safe for 20 years and have made it possible for thousands to flee from the oppressive grip of the Taliban. You have also brought down the architects of 9/11,’” Oxford said Aug. 31 during The American Legion National Convention in Phoenix. “We empathize with the emotional toll taken by recent events on our Afghanistan vets. I had many similar feelings when Saigon fell.

“Political and diplomatic failures, however, are in no way a reflection of our great military members who have done everything that was asked of them.”

Oxford asked that U.S. officials learn from the mistakes made during the evacuation from Afghanistan. “We have not seen the safe and orderly evacuation of our fellow Americans, our Afghan allies and their families that we had hoped for,” he said. “We will continue to advocate that safe passage be provided to those who assisted our military during our long deployments. They fought shoulder to shoulder alongside our men and women.

“The American Legion implores and asks our senior government leaders to institute a far better evacuation and withdrawal for Iraq. We need to continue expediting Special Immigrant Visas for interpreters and their families. We simply cannot and must not abandon our allies.”

Oxford praised Legionnaires and posts during a pandemic that has spanned 18 months and has seen a recent surge in cases due to the coronavirus’ Delta variant.

“Tremendous challenges require tremendous response and the American Legion Family has proven that it was up to that task,” he said. “From setting up supply and relief centers to conducting virtual job fairs, posts and departments continued to do what The American Legion has always done: serve our communities and our country.

“As the vaccines became available, we have encouraged people to take them. Many American Legion posts have become vaccination sites. With thousands of posts performing outstanding services to their communities in spite of COVID, most will go unrecognized. But praise and attention isn’t what motivates most Legionnaires. It’s the inner satisfaction that we get when we live up to our motto ‘Veterans Strengthening America.’”

Buddy Checks became a vital program during the pandemic, and Oxford urged Legionnaires to continue making them on fellow veterans. “There are many reasons to do a Buddy Check,” he said. “Providing helpful information about a new (Department of Veterans Affairs) service or a post activity could be one. Simply offering assistance to move garbage cans from one side of the street another. Or a trip to the grocery store.

“But what if the veteran you contacted was contemplating suicide when he or she received your call? You can make a life or death difference. You can be the call that convinces that veteran that he is valued and appreciated. You can be the call that convinces her that there is a community of veterans – a community called The American Legion – that cares about her well-being.

Sticking with health, Oxford said The American Legion was instrumental in the awarding of Agent Orange-related benefits to Vietnam War veterans. And he said it will continue to lobby for those veterans dealing with illnesses related to toxic exposures.

“It’s time for Congress to pass the Toxic Exposure in the American Military Act, also known as the TEAM Act,” he said. “The American Legion fought tirelessly over decades for our Vietnam veterans to receive the benefits that many have died waiting to receive. We must fight just as hard or even hard for our current generation of heroes.”

Switching gears, Oxford said that the No. 48 American Legion car has provided the organization with exposure never before attained. The car, part of Chip Ganassi Racing, has been driven by seven-time NASCAR series champ Jimmie, former Indy 500 Tony Kanaan and Alex Palou, who currently is in second place in the NTT INDYCAR Series standings.

“That is what the Chip Ganassi team brings to the table: experience and respect. It kind of reminds me of a certain veterans organization,” Oxford said. “The car bears The American Legion name, but it is bringing attention to issues that impact all veterans, families and young people who benefit from our programs and services. It races for all of the posts that stood up while society shut down during the COVID-19 pandemic.”

Oxford said the services that The American Legion provides will always be its primary mission. But he said building membership is a priority.

“I believe that going into the spring of last year before COVID we had the momentum to reach out goals,” he said. “Then the COVID-19 pandemic changed our entire plan for the year. Response, protection and service became our greatest priorities.

Oxford even offered tips to help build that membership when reaching out to younger veterans. “We’ve all heard young veterans ask, ‘What’s in it for me, American Legion?’” he said. “It’s a fair question. But I say to them ‘don’t listen to us. Watch us, instead. Watch us fight hard for their benefits and well-being. Watch us organize and operate our popular youth programs. Watch us support and provide temporary financial assistance to families during times of need. Look at the $1 million we provided to the Coast Guard (in 2019).

‘Watch our National Emergency Fund provide a lifeline to victims of natural disasters. Watch us check on veterans and their buddies – not to sign them up as members, but simply to say, ‘We’re here. Tell us what we can help with.’”