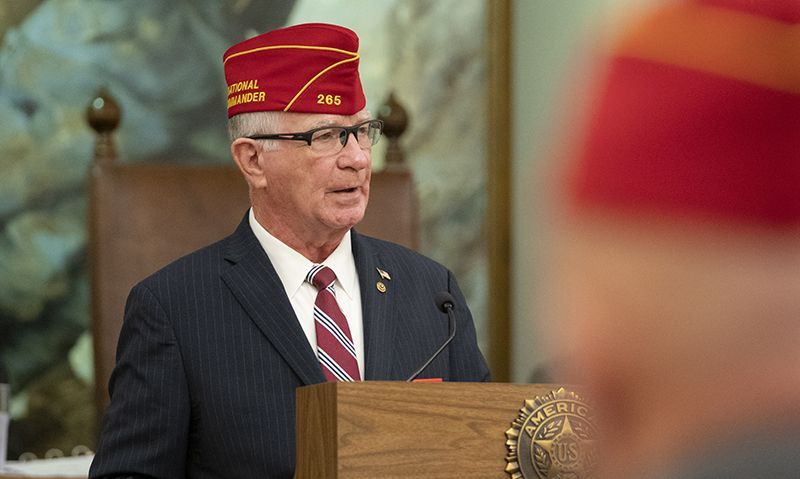 As Veterans Day nears, the week of Nov. 11 is a perfect time to conduct Buddy Checks on post members and veterans in the community. American Legion National Commander Paul E. Dillard called upon posts, districts and departments to conduct Buddy Checks in his opening remarks to the National Executive Committee on Oct. 5 in Indianapolis during Fall Meetings. Buddy Checks serve as an opportunity to check on the needs and well-being of veterans, but also as a suicide prevention initiative.

“We must reach out to our Afghanistan veterans who are experiencing a whole range of emotions due to recent events,” Dillard said. “We need to ensure that they are not isolated and that they know that they have a home and friends in our American Legion Family. Buddy Checks are for all veterans, but suicide prevention is perhaps the greatest benefit that can come from a Buddy Check,” he said.

Dillard shared that USA Today reported a 15 percent increase in suicide among active-duty troops in 2020. However, last month in its annual report on National Veteran Suicide Prevention, VA showed a 7.2 percent decrease in veteran suicide in 2019 from the year before.

“We have a lot of work to do. And by ‘we’ I don’t mean just The American Legion but America as a whole. Buddy Checks are only one tool. We must remove all stigmas associated with asking for help or being diagnosed with PTSD, depression or any other condition that could lead one to take his or her own life.”

Dillard asked members of the NEC to “memorize, publicize and emphasize” the Veteran Crisis Line at 800-273-8255 then press 1. Or text 838255. Or chat online at veteranscrisisline.net/chat.

A few weeks ago, Dillard attended the Cuyahoga Regatta in Cleveland as the American Legion Operation Comfort Warriors program was a primary sponsor of the veterans rowing race. The OCW grant covered the sponsorship, as well as a boat, oars and rack in the popular event.

“You should have seen the joy in the hearts of these young men and women and the gratitude that they expressed to The American Legion for what our organization has done for them,” Dillard said. “Some of the rowers are blind. Some are amputees. Other have some of the invisible wounds of war that we are all familiar with.

“But just as our new red, white and blue logo looked great on The American Legion No. 48 INDYCAR car, it looked equally sharp on a competitive rowboat.”

It’s through the many programs of The American Legion that support veterans and their families, like OCW, that “we prove time and again that we are Veterans Strengthening America who believe in ‘No Veteran Left Behind,’” Dillard said. The American Legion will grow in membership “by committing ourselves to the proposition of No Veteran Left Behind. And by ‘no veteran’ I include their families as well. Because most veterans will tell you that if you are helping their family, you are also helping that veteran.”