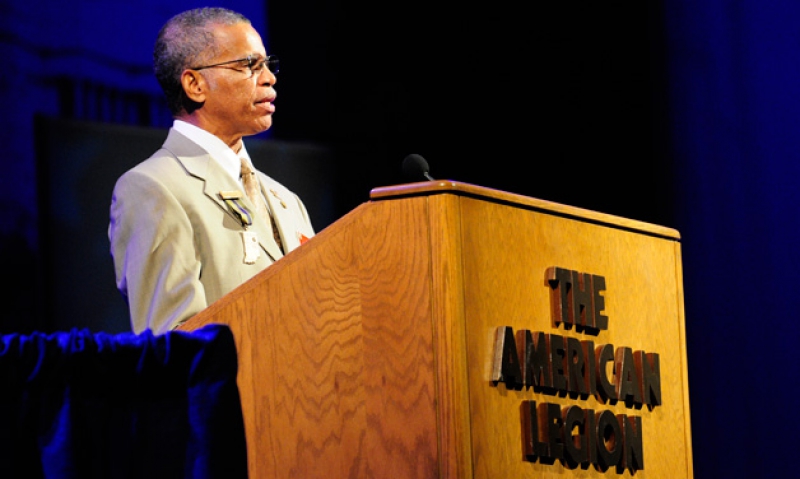 To amplify his Sunday message of strength through faith, American Legion National Chaplain Gerald Theriot of Louisiana referenced a particular prayer book distributed to U.S. military personnel between 1942 and 1950.

The prayer book's title  – "Strength for Service to God and Country" – would ring a bell with Legionnaires gathered in Indianapolis for the 2012 Patriotic Memorial Service of the 94th Annual National Convention of The American Legion, whose motto is "For God and Country."

"Throughout our military history, the Bible has been used as a source for some to find strength for service to God and country," he told hundreds who gathered for the service in the Indianapolis Convention Center. "This is further emphasized by a book with that term.

Strength for Service to God and Country' was published after the Dec. 7, 1941, attack on Pearl Harbor. The book was distributed to service members. It contained scriptures, readings, and prayers for a full year, on a daily basis."

The anchor of the book, he explained, is Psalm 91, which appears in its pages. Former American Legion National Chaplain Norris Keirn of Indiana read Psalm 91 during Sunday's service, and Department of Texas Chaplain Dr. Charles Edwards read Psalm 23. "If we explore these two passages, we begin to understand that these are much more than expressions of strength. They are an appeal for us to have faith in our God. They tell us that our strength for all things in life are based in our understanding that if we trust in the Lord, then we shall have the strength to face all challenges that come our way."

Recently elected Boys Nation President Jonathan Hess of Alabama lit the candle of remembrance for missing POWs, and the service included solos and choral arrangements by the Manual-Aires, a high-school show choir from Indianapolis.

Colors were posted and retired by the American Legion Post 472 Color Guard of Houston, Texas, which received top honors in the national color guard contest Friday.