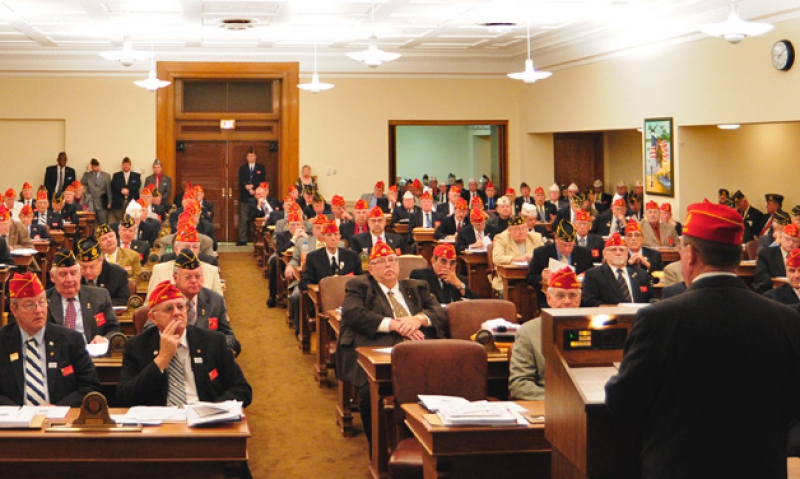 All those on hand at Fall Meetings gave their support for Operation Comfort Warriors and Resolution 64, which outlines the Legion's strategy to reach a record in membership. (Photo by Eldon Lindsay)

The National Executive Committeemen assembled in Indianapolis for the 2012 Fall Meetings heard a number of presentations regarding Legion initiatives and approved many important resolutions affecting the organization and veterans. But two topics continually surfaced throughout the two-day gathering: support for the Legion’s Operation Comfort Warriors program and the importance of reaching a record number of members by 2019, the Legion’s centennial.

That membership goal is embodied in Resolution 64, a key measure that charges the Legion’s Internal Affairs Commission and Membership & Post Activities Committee with devising a five-year membership plan to eclipse the previous all-time membership high set in the 1990s.

“We’ve passed a lot of important resolutions during these meetings, but none of them will matter if we aren’t around to implement them,” Koutz said. “If we don’t keep advancing membership, who will be there to keep that veteran from falling through the cracks?”

Koutz’ banner program - Operation Comfort Warriors - also received a great deal of attention, as NECmen and other Legion officials used the meetings to present donations to the support program that provides wounded warriors with comfort items. Generous contributions from posts, departments and other military-friendly organizations rolled in throughout the gathering, eventually reaching a total of about $60,000.

“I set a goal to raise $500,000 for (OCW) during my year and from what I am seeing out in the various departments, I think we will meet that goal,” Koutz said.

Noteworthy resolutions that passed include Resolution 14, which makes Shelby the host city for the Legion World Series through 2019; Resolution 22, which calls on the U.S. Postal Service to make speedy delivery of all VA benefit claims so as to avoid delay in filing; Resolution 28, which calls on government officials to reopen the Patriot Academy at Muscatutuck Urban Training near Butlerville, Ind.; and Resolution 39, which authorizes departments to send a volunteer suicide prevent coordinator to VA centers around the country.

At the summation of the meetings, Koutz stressed the importance of returning to home departments to promote membership and put the momentum gathered at the meetings into practice.

“We need to keep this energy flowing as we return to our departments,” Koutz said. “We know there’s enough talent in The American Legion to keep this organization strong for years to come.”