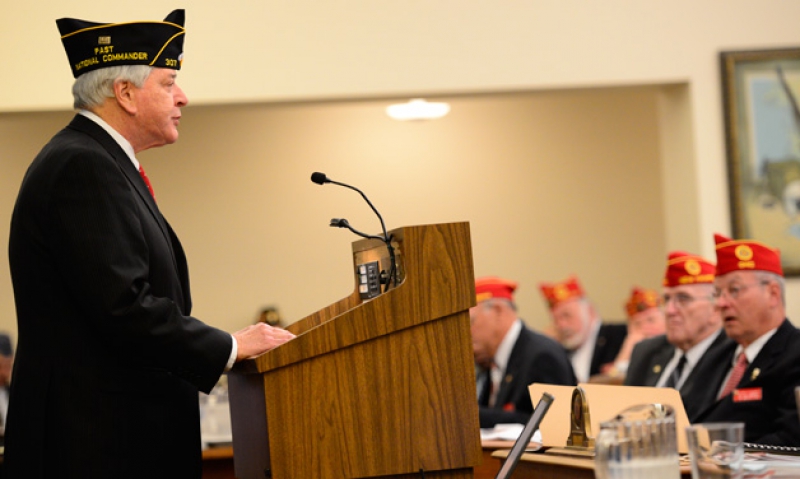 On May 8, American Legion Past National Commander William Detweiler delivered a report to the National Executive Committee (NEC) during Spring Meetings on the findings of the Legion’s Traumatic Brain Injury/Post-Traumatic Stress Disorder Ad Hoc Committee. Following his report, the NEC voted unanimously to make the TBI/PTSD Ad Hoc Committee a permanent committee that will report annually about its findings.

Detweiler reported that the primary problem with treatment for TBI/PTSD symptoms by the Departments of Veterans Affairs (VA) and Defense (DoD) is the overuse or misuse of medications that do not have therapeutic benefits to veterans, which can lead to depression or suicide. The committee is also concerned with the lack of research studies on new and innovative complementary and alternative therapies, such as Virtual Reality Therapy and Hyperbaric Oxygen Therapy, and believes that “all possibilities should be considered in the attempt to find treatments and cures for these conditions which affect a significant numbers of veterans, and that these treatments and cures should be available to all veterans,” Detweiler said.

On April 25, Sen. Bernard Sanders (I-Vt.) introduced bill S.852, Veterans’ Health Promotion Act of 2013, “to improve health care furnished by the Department of Veterans Affairs by increasing access to complementary and alternative medicine and other approaches to wellness and preventive care, and for other purposes.”

The TBI/PTSD committee has also investigated the complaints of veterans who have been diagnosed with PTSD and had these diagnoses reversed by DoD or a VA examiner and reclassified as a personality disorder and/or pre-existing condition. This results in denial to the veteran of his or her compensation and other health care benefits.

During Spring Meetings, the NEC approved Resolution 26, which charges the Legion’s Veterans Affairs and Rehabilitation Commission and National Security Commission to study existing DoD policies and procedures for character of discharge for servicemembers that served during time of war and were susceptible or diagnosed with TBI or PTSD, or were victims of military sexual trauma. And it urges DoD and each military service branch to conduct an official study and evaluation of servicemembers from Sept. 11, 2001, to present.

Other findings by the committee include:

"TBI and PTSD is not going to end,” Detweiler said. “I think the pride of the accomplishment of this committee has been public awareness of TBI and PTSD, and I think we need to make these two things a priority. Primarily, we need to keep the public aware, and we need to keep pressure on the VA and DoD to take these issues seriously, and that these guys and gals are not faking PTSD.”