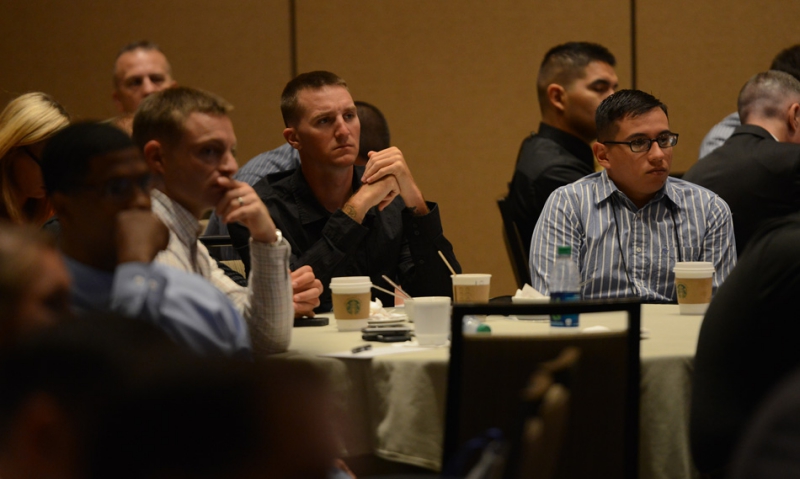 Veterans, servicemembers and their spouses learn about job opportunities during The American Legion's Employment & Empowerment Summit at national convention on Aug. 25. (Photo by Lucas Carter)

About 70 veterans, active-duty military and their spouses learned about employment opportunities and received job-searching advice from several veteran friendly companies Monday during The American Legion’s Employment & Empowerment Summit, which coincided with the organization’s 96th National Convention in Charlotte, N.C.

All the companies present employ more than 70,000 veterans combined, and are committed to hiring more. GE currently has 10,000 employed veterans with a five-year campaign to hire 1,000 veterans a year. As it approaches its third year, the company says all goals have been met.

“We have a support system to help you learn the culture, learn the new language and just really help you feel comfortable with the new place that you are working now,” said Kristine Urbauer, program manager of military initiatives at GE. “These (support system) people have been where you are-transitioning from military to the civilian world.”

UPS currently employs 24,000 veterans with a commitment to hire 50,000 more over the next five years.

“When you think about The American Legion, military and UPS, there are many similarities: the culture, the language, the training, the commitment to service, community involvement, caring for others, mentors, sacrifice and executing the mission,” said Chip Meyers, vice president of corporate public affairs at UPS.

The smallest company represented was Sharp Decisions based out of New York City. They hire transitioning military professionals with IT experience and train them to test software and then help them find a job with those skills. George Thomas, director of business development & military veteran recruiting for Sharp Decisions, challenged the employment summit attendees to be different when searching for employment by writing a one-paragraph handwritten letter introducing yourself and your qualifications for the job.

“When I come into the office Monday morning and I have 87 emails but there’s a UPS letter sitting on my desk, I’m going to open the letter first.”

Urbauer is also “a big fan” of the handwritten note, saying it makes a great impression. “When I get a note on my desk that’s the first thing I’m going to open when I get into the office,” she said. “It’s more fun and more personal than reading 85 emails. And if you’re a running candidate for a job with us, that could be the deciding factor.”

Every employer represented said LinkedIn is their number one tool to recruit — GE has staff solely dedicated to searching for possible employees “so make sure your photo is professional and updated,” Urbauer said. Paul Turevon, vice president for Talent Acquisition & Movement at Time Warner Cable, agreed with Urbauer.

“At the end of the day it’s a very competitive market,” Turevon said. “Particularly for us, we are hiring someone that’s a field technician and the first thing I see is how they look. Would I trust this person be in my house installing cable?”

Turevon said veterans employed at Time Warner Cable excel as field technicians. “I rode around with a cable installer who was in Iraq in 2007. He said veterans make great installers because you get up in the morning and you’re given a task, you work in different elements, and you are team oriented.”

When speaking to veterans searching for employment, Turevon tells them “that interviewing is like hitting a baseball. You don’t want your first at bat to be at a World Series. I don’t care if you think it’s the worst job on the face of the earth, go interview.”

However, the “dark side” to social media, such as Facebook, is putting things on there you don’t want a company to see, said Steve Toomey, military and diversity recruiter for CSX Transportation. CSX will have at least 75 career opportunities available at the Hiring Our Heroes career fair.

“Our recruiters do search for your Facebook page after the interview. Why do we do that? Railroads are built around safety so one of the first things we want is to make sure you have a safe lifestyle,” Toomey said. “We do not want to take a chance on a candidate who looks good in person but goes the opposite way in their social life. Because your professional life and your social life interact a lot.”

Before attendees left the employment summit to attend the workshops, David Wallace, military relations project manager for Lockheed Martin, left them with a few words of advice.

“When you want to get a job with a company, know what that company is about. Do your research,” said Wallace, a member of American Legion Post 162 in Alexandria, Va. “If you really want to have a good network, join The American legion. You have to network to find a job, and this is one great organization that is giving you that opportunity to really seize.”