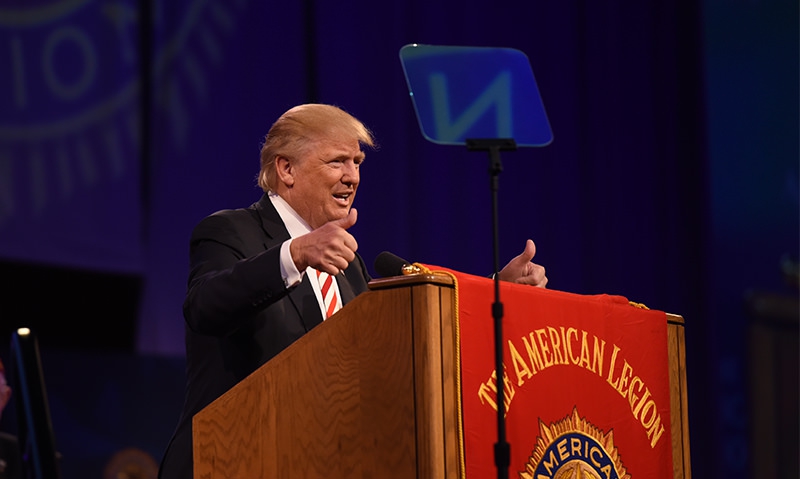 “We will stop apologizing for America, and we will start celebrating America,” Trump told delegates to The American Legion National Convention on Sept. 1 in Cincinnati. “We will be united by our common culture, values and principles – becoming … one country, under one constitution, saluting one American flag: the flag all of you helped to protect and preserve.”

Trump said supporting those who defend the flag is a priority. “We have to make sure we give our military the tools they need … to deter violence and aggression from our foreign adversaries,” he said. “We will rebuild our depleted military, and pursue a state-of-the-art missile defense. We will do it based on those three famous words: peace through strength.

Trump said the Department of Veterans Affairs needs a total reform, including appointing a VA secretary charged with cleaning up the VA, disciplining and removing any VA employees who fail veterans or breach the public trust, and ensuring veterans get timely access to top-quality care, including world-class care for women veterans.

He also said he would not advocate privatizing VA but would implement private-sector care. “(VA) will remain a public system, because it is a public trust,” he said. “But never again will we allow any veteran to suffer or die waiting for care. That means veterans will have the right to go to a VA facility, or the right to see a private doctor or clinic of their choice – whatever is fastest and best for the veteran. The veteran will be in control.”

Trump said the United States would defend its border, but also expressed optimism after meeting with Mexico President Enrique Peña Nieto on Aug. 31 that the two nations could “work together to accomplish great things for both of our countries.”

The pair discussed the need to stop the illegal flow of guns, drugs, cash and people across the border, eliminating drug cartels and working together to ensure both nation’s economies prosper. “A more prosperous Mexico means fewer illegal border crossings, and a better market for products made in the United States,” he said.

Sticking with the economy, Trump vowed to look carefully at every U.S. trade deal with other nations and explore what needs to be done to protect U.S. jobs and create new opportunities for the nation’s workers.

“We will fight for every last American job,” he said. “We’re going to show ourselves and the world again what a strong and growing American economy looks like.

“We are going to give major tax relief to every worker and small business in this country, bring thousands of new companies and millions of new jobs back to our shores. The American worker has been forgotten, and we're not going to let that happen.”

Switching back to national security, Trump said an era of “nation building” would come to an end. “We are going to … create a new foreign policy – joined by our partners in the Middle East – that is focused on destroying ISIS and radical Islamic terrorism,” he said. “We will extend the hand of friendship to any nation that will work with us in good faith on this vital mission.

“At the same time, we will change our immigration screening procedures to help keep terrorists and extremists out of our country. That includes stopping the influx of Syrian refugees.”

Trump praised Legionnaires for what they’ve done for the country. “The men and women of The American Legion represent the best of America: strength, courage, selfless devotion,” he said. “Your organization, and its members, have done so much to defend our country, our flag, and to advance the cause of Americanism – not globalism. We are in your debt.”