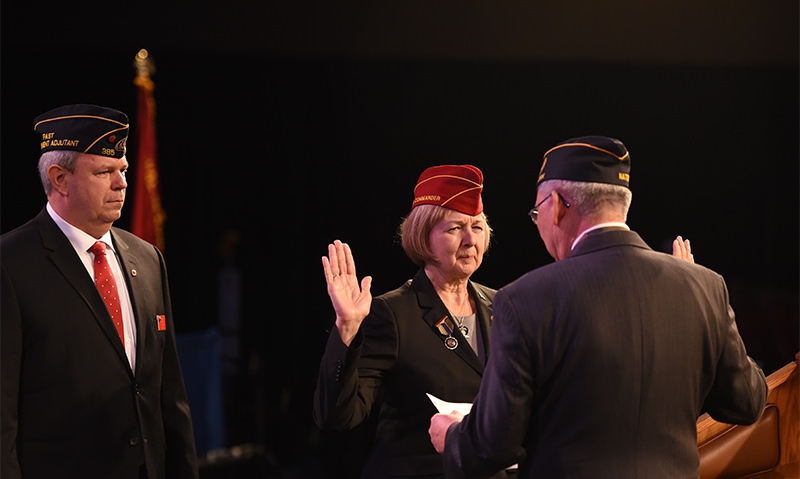 Standing at the podium after being the first woman elected as American Legion national commander, Denise Rohan had one question for the delegates to the Legion’s national convention in Reno, Nev.: “Are you ready?"

The Wisconsin resident challenged Legionnaires to work together to continue the organization’s 98 years of service to the nation, and its veterans, military and their families.

Rohan said her theme this year will be “Family First,” and that the theme is based on The American Legion’s motto of “For God and Country."

“I believe we were put here, where you are today, and in the positions you hold currently for the greater good,” Rohan said. “We are not here to judge one another. We are here to nurture and take care of one another. Families grow through love and support for one another. As an American Legion family – we need to treat each other in that same spirit – like part of our larger extended family."

Taking a cue from the U.S. armed forces, Rohan chose the color purple for her membership shirts. “I chose purple for this year’s membership shirts to show that we are joining forces as an American Legion family,” she said. “Just like all branches of the military started working together and joined forces, they purpled up over the last several years, it is time for The American Legion family to also purple up as we all work together for the common good.”

A 33-year Legionnaire and current member of Post 385 in Verona, Wis., and U.S. Army veteran, Rohan has served as post and department commander. But when her husband, Mike, was first approached about joining The American Legion and Denise identified herself as an eligible veteran, she said she was informed ‘Women join the Auxiliary.’

“That post that denied me membership 37 years ago, they have a picture of me on the wall with a sign that reads ‘She could have been a member of our Post. Remember, women are veterans too!’” Rohan said. “It is a great reminder that since the birth of The American Legion back in 1919, our leadership knew that a veteran was a veteran regardless of race, religion or gender. Women could vote for national commander before they could vote for the president of the United States. I know that women have been and continue to be in leadership positions in this organization.”

Rohan urged delegates to keep up the support for military families as servicemembers continue to be deployed across the world. “The American Legion family will stand tall next to our heroes and their families,” she said. “There are National Guard and reserve families living in your home towns who are feeling alone and afraid. Please continue to step up and make connections with those families. And, whenever possible, make that connection before the family member is deployed.

“Get to those Yellow Ribbon events that are happening prior to deployment. Get to know the Family Readiness Group leader for your units and let the families know what we do, who we are and what assistance we can offer on a daily basis.”

Rohan shared the story of being at a Veterans Day event in a community a few years ago. The main speaker, a Gold Star father, shared the story about his son who had been killed in Afghanistan. During his speech a girl in the choir began crying and was escorted to the back of the room.

“When the program was over, the mother, who I had never met, sought me out in the crowd,” Rohan said. “She wanted to say thank you to The American Legion on behalf of her family. You see, one of the times that her husband had been deployed there was a fire in her home, and they also had a broken water heater. The local American Legion stepped up, helped her apply for Temporary Financial Assistance and then came to her home and helped make repairs.

“The mom said she is confident that had it not been for The American Legion’s Temporary Financial Assistance program and the Legionnaires who helped repair their home, her husband may not have returned home safely. With things being taken care of at home, she knew that she did not need to trouble her husband with those issues. He could concentrate on his mission and could have one less worry on the battlefield, thanks to The American Legion family. Because that’s what we do and that’s who we are.”

Rohan said that along with Temporary Financial Assistance, she also will ask Legion family members to provide financial support to the Legion’s service officers program. “We witnessed history here yesterday as President Trump signing The Veterans Appeals Modernization Act of 2017 here on our stage,” she said. “This will help claims and appeals get processed faster, but we need trained service officers to assist in getting claims properly submitted. The faster we can get veterans the benefits they earned, the faster they can go on to lead happy, productive lives. It doesn’t just help the veteran; it helps the entire family.”

Rohan also said it’s time for Legion posts to start inviting the community in to show all the great work they are doing. She said hosting a Veterans Day meal is a perfect opportunity to do so.

“Make sure to include current and expired members, members of your holding post, Blue Star and Gold Star mothers, student veterans, military recruiters, members of the National Guard and reserve along with their families, veterans in local care facilities or hospitals and their families,” Rohan said. “Let’s light up social media with the world’s largest Veterans Day celebration this nation has ever seen. Let’s feed the entire community, because putting on great community meals is another great part of who we are and what we do.

“To make a difference in someone's life, you don't have to be brilliant, rich, beautiful or perfect. You just have to care enough to be there.”