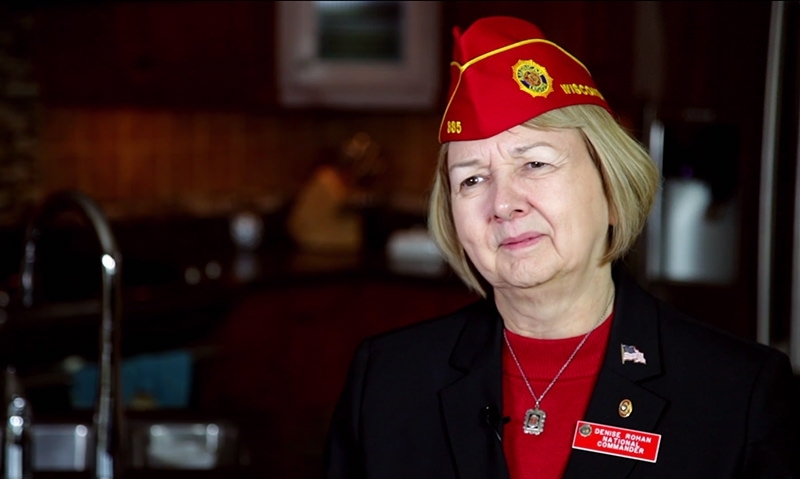 American Legion National Commander Denise H. Rohan is featured in the documentary film, “Hello Girls.” One of five films that will be a part of the Centennial Film Festival at The American Legion national convention in Minneapolis.

The American Legion has appeared in bit parts and had top billing in cinematic productions over the past century. In 1938, many major studios produced movies that featured the thriving new veterans organization.

A sampling of those movies and more will be featured during The American Legion's Centennial Film Festival, held in conjunction with national convention in Minneapolis.

The Centennial Film Festival on Monday, Aug. 27, will be held in Room 102, Sections A&B, Level One in the Minneapolis Convention Center. The following are the films, a brief description and start times:

A young Donald O'Connor ("Singin' in the Rain") and William Frawley ("I Love Lucy") lead the cast of this drama/mystery about a pair of brothers who discover their father was dishonorably discharged and they are ineligible for membership in the Sons of The American Legion. But there's more to their father's story that meets the eye.

Two Legionnaires, played by Victor McLaglen and Brian Donlevy, are ordered by their boss to break up a romance between his son and a showgirl while the pair is in New York for The American Legion convention. In the course of their misadventures, the friendly rivals get mixed up with a nightclub entertainer played by Gypsy Rose Lee, which is when the mayhem really begins.

A documentary film about the unsung female communication operators that were recruited and deployed to Europe during World War I. Contains rare historical footage and a segment including American Legion National Commander Denise H. Rohan.

Partly filmed on location at American Legion Post 43 in Hollywood, this mystery unfolds after a prize fighter is murdered before the opening-round bell sounds. District Attorney Bill Devons (Neil Hamilton) has little to go on and questions every spectator to solve the crime.

Old Joel Bentham (Harry Davenport) is awarded $50,000 as the last surviving Civil War veteran and his formerly neglectful neighbors suddenly have a great interest in helping him spend it. Instead, Joel offers a home to a young woman (Dorothea Kent) forced to live a hobo life and Ray (Robert Wilcox), the wild grandson of a war comrade who has run up a debt with some gangsters. Ray has a change of heart from his intent to rob the old man, but fights a losing battle when the gangsters show up with their own plan. Just when all seems lost, a parade of Legionnaires save the day and everyone goes off to Chicago for a convention.