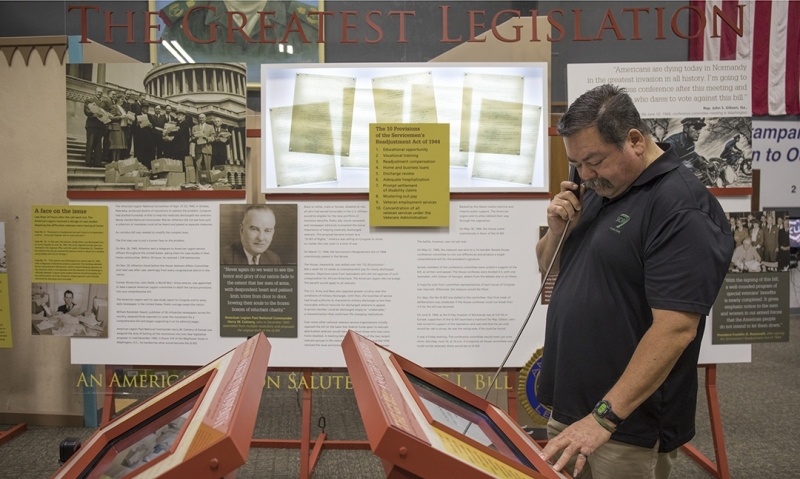 Alexander Reyes visits “The Greatest Legislation: An American Legion Centennial Salute to the GI Bill” at the Gold Star Museum in Des Moines, Iowa, on Tuesday, May 15, 2018. Photo by Rachel Mummey

The multimedia exhibit “The Greatest Legislation: An American Legion Centennial Salute to the GI Bill” will be the main attraction in the Media & Communications Exhibit Hall booth area at the 100th American Legion National Convention later this month.

The exhibit, which has been traveling the nation, tells the story of the Servicemen’s Readjustment Act of 1944, the dramatic fight for its passage, how it transformed the world, and the changes it has undergone in the 21st century. It includes artifacts and video kiosks. Read about the journey of the exhibit, and the conversations it’s started, here.

Media & Communications Division staff will be on hand to answer visitors’ questions about the Legion’s Centennial Celebration, the new national Legacy & Vision Web platform and more. Also available will be information on the National American Legion Press Association (NALPA) and the opportunity to join. The booth area stretches from #211 to #219.

On Saturday, Aug. 25, acclaimed artist Matt Hall will hold two signings at the booth, of lithographic prints of the “Legacy & Vision” painting he produced for the Legion’s 100th anniversary. The lithographs can be purchased through the Emblem Sales booth area for $29.95.

The Exhibit Hall will be open Friday, Aug. 24, through Tuesday, Aug. 28, in Hall C, Level 1 of the Minneapolis Convention Center.