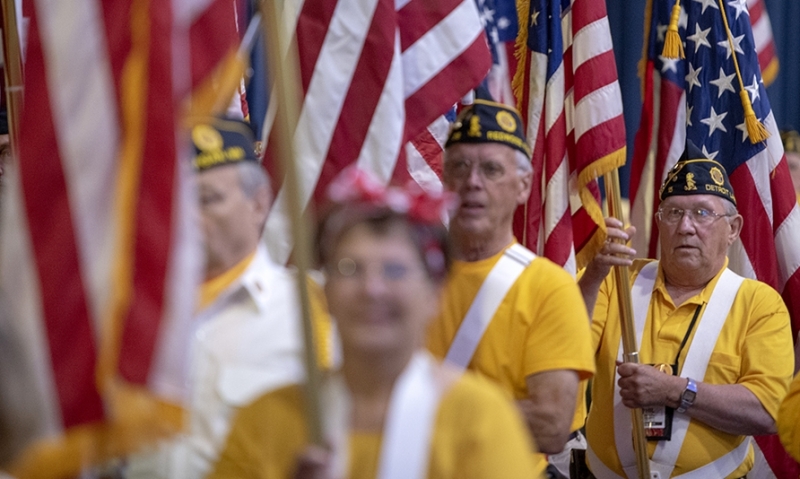 The threat of thunderstorms moved The American Legion National Convention parade inside the Minneapolis Convention Center on Aug. 26. But a change in the setting didn’t mean a change in enthusiasm for those both in the parade and those inside the convention center cheering them on.

Moving through Hall B, marchers in the parade wave to National Commander Denise Rohan and the others on the reviewing stand, while fellow Legion Family members stood along the aisles and sat in chairs to watch all the action.

Past Department of Wisconsin Commander Daniel Seehafer was happy that the parade wasn't simply cancelled – especially considering the national commander for this year also hails from Wisconsin. “I think this is great,” he said. “We did the best we could. What is it they say – we’ve got to adapt and overcome? This was something that was nice to have.

The move inside meant no motorized vehicles in the parade, but every American Legion department still put a delegation in the lineup. Leading off the contiguous departments was West Virginia, which had marched in the last position a year ago.

“We went from dead last … to the very front in one year,” Department of West Virginia Vice Commander Tom Hicks said. “So for it to have been cancelled would have been very disappointing.”

Hicks said it was a team effort to get to the front of the parade, which is based on department membership. “It was a concentrated effort from our membership group and all the posts and all the members doing their best to recruit as early as possible,” he said. “We have to really advertise and promote The American Legion.”

Following the parade, the Department of Minnesota and Resource One treated Legion Family members to a party in the convention center. Entertainment was provided by the American Bombshells, a musical group that delivers a modern day twist on The Andrews Sisters while providing morale and transition programs to veterans and the U.S. military. The American Bombshells previously have entertained American Legion crowds at both the national convention and Veterans Inaugural Ball.