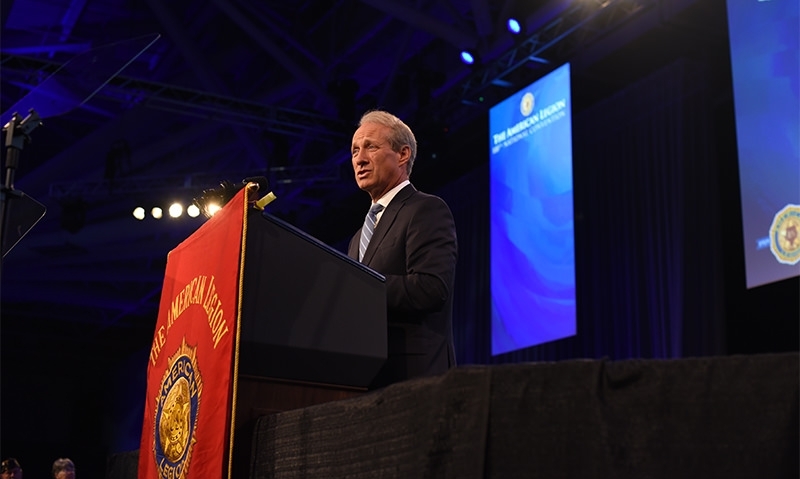 A gold-plated .22-caliber repeating rifle engraved with images of a bald eagle, the Statue of Liberty and the Liberty Bell is on its way from the 100th American Legion National Convention in Minneapolis to the White House in Washington, D.C.

President Donald J. Trump is the recipient of the rifle, the annual prize for the 2018 Philip B. Onderdonk Jr. Religious Liberty Award, named for the longtime American Legion national judge advocate who argued in court to protect military and veterans memorials that include religious symbols. In nearly all cases, federal courts have ruled or overturned cases in favor of The American Legion’s position and memorials containing religious symbols have been spared from removal.

“This year’s award recipient wasn’t that difficult,” said Kelly Shackelford, president and CEO of First Liberty Institute, the largest legal organization in the nation dedicated to protection of religious freedom, formerly known as Liberty Legal Institute. “We have never had a year when somebody so surpassed anybody else in the advances they made for religious freedom.”

He also said nearly 100 lawsuits threatening religious freedom have been stopped during the Trump administration.

Having fought to protect similar monuments at Mt. Soledad and the Mojave Desert in California, First Liberty and The American Legion are currently fighting to protect the Bladensburg WWI Memorial in Prince George’s County, Md. On June 25, attorneys for First Liberty Institute and Jones Day filed a petition on behalf of the Legion asking the Supreme Court to reverse a lower court decision that could lead to removal of the cross-shaped memorial.

“The Supreme Court is the last hope for preserving the Bladensburg WWI Veterans Memorial,” Shackelford said after the petition was filed in June. “For nearly 100 years, the community and families of the 49 fallen sons of Prince George’s County listed on the memorial’s plaque have considered the Bladensburg WWI Veterans Memorial their sons’ gravestone. We cannot allow their memory to be bulldozed.”

The memorial was erected in 1925 to reflect cross-shaped grave markers standing over the graves of American troops who died fighting in Europe.