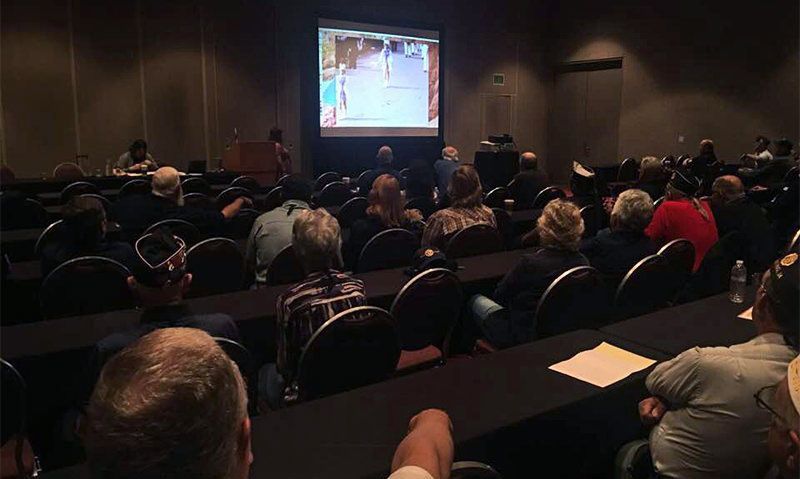 A dozen or more films and videos, including artful tributes to the Meuse-Argonne offensive of World War I and the D-Day invasion of World War II, will be shown in the second American Legion Centennial Film Festival Monday, Aug. 26, in Rooms 126 and 127 of the Indiana Convention Center.

Indiana filmmaker Jo Throckmorton will be on hand to open the festival with a screening of his short film, “Meuse-Argonne Offensive.” A trailer of his movie now in production, “Over There: Hoosier Heroes of the Great War,” will also be shown, and he will be available to discuss his work with the audience.

At 1 p.m., the award-winning “Sixth of June” short film pays homage to the D-Day invasion that began the liberation of Europe in World War II. The film includes current footage and interviews with veterans and survivors and explores the ways in which northwestern France continues to express its gratitude over U.S. military sacrifice 75 years after the liberation.

Another film, “Heroes of WWII: The European Campaign,” includes rarely seen interviews with more than 20 combat veterans who fought in the European Theater. The film is narrated by Michael Reagan, son of former U.S. President Ronald Reagan, directed by Doug Stebleton and written by American Legion Magazine editor Jeff Stoffer. It is scheduled to be shown at 10 a.m.

The festival also features two historic documentaries, one on The American Legion’s battle to gain government accountability for veterans exposed to Agent Orange during the Vietnam War, and the other about an American Legion Baseball all-star team that traveled through Latin America, playing teams from Panama, Cuba, Mexico and other countries in the 1950s.

Schedule of screenings (subject to change):

9:05 a.m. — Short film “Meuse-Argonne Offensive” and trailer for “Over There: Hoosier Heroes of the Great War,” plus discussion with filmmaker

9:45 a.m. — “To Strengthen a Nation/Prelude,” the prologue to the American Legion centennial documentary film series

11 a.m. — “To Strengthen a Nation/Episode 1: Formation of The American Legion”

11:10 a.m. — “A Time for Action,” an early 1990s documentary with rare interviews, on The American Legion’s battle to gain recognition of Agent Orange exposure among Vietnam War veterans

1 p.m. — “Sixth of June,” a new take on the D-Day invasion and the effect it still has on the people of Normandy

2 p.m. — Various other video selections from The American Legion

The festival is free of charge, and visitors may come and go as they wish according to the films they would like to see and their convention schedules.