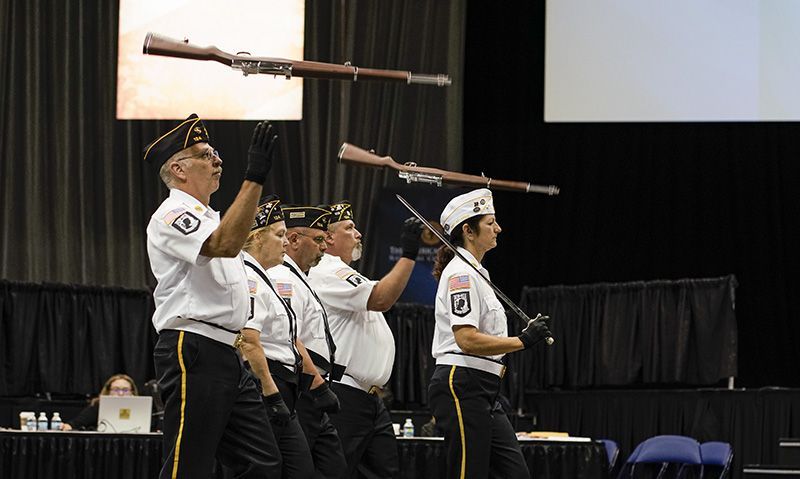 The 101st American Legion National Convention color guard contest, held Aug. 23 at the Indiana Convention Center in Indianapolis, featured a group of competitors who spanned nearly every community that's part of the American Legion Family - from organizations to generations.

Three competing units represented the Sons of The American Legion, and one unit the American Legion Auxiliary Juniors. (Competing in the Open Class, their routine was set to music.) And two generations make up the Team 100 Honor Guard from South Hadley Post 260 in Granby, Mass. The unit took its name in honor of The American Legion's centennial, and marched in World War I-replica uniforms. According to Brian Willette, they have worked on events in their area with the National World War I Centennial Commission; that anniversary segued into the Legion's centennial. They do it "to honor those who went before us." But he is not the unit's captain - his daughter, Christine Lupacchino, is. Head of the honor guard on her Air National Guard base, he said she has taught him, more than anything.

"We have a good time," Lupacchino added.

The "grand prize" of the color guard contest - to be the national commander's color guard at the 2020 national convention - came down to half a point between two of the decade's dominant competitors: Newport Harbor Post 291 of Newport Beach, Calif., and Harrisburg Post 472 of Houston. Harrisburg took this year's title. While presenting the awards, American Legion National Commander Brett Reistad struck a personal note of commonality with the units, going back to his active-duty days with the famous Army Old Guard. "In a sense, I live vicariously through your performances," he commented.