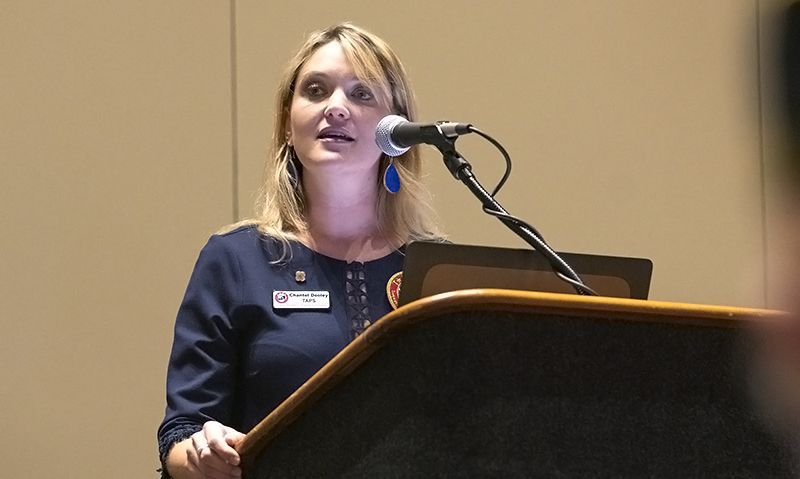 On Aug. 28, 2001, Tragedy Assistance Program for Survivors (TAPS) President and founder Bonnie Carroll received an award of recognition during The American Legion’s 83rd National Convention in San Antonio for her support of military families who have lost a loved one. Two weeks later, America was attacked on Sept. 11. Since then, The American Legion and TAPS have worked alongside one another to advocate for and continue providing support for families of America’s fallen heroes.

“The American Legion has stood right alongside all of us … you all know that the service does not end when the uniform comes off,” said Chantel Dooley, director of impact assessment for TAPS and the surviving fiancé of U.S. Air Force Capt. Alex Stanton, to American Legion National Security Commission members during the Legion’s 101st National Convention in Indianapolis Saturday morning. “I find comfort in knowing that there are patriots like each of you who continue to honor (Alex) by living a legacy of service and patriotism.”

There wasn’t a dry eye in the room when Dooley shared a video with commission members about military families who have lost a loved one in combat and non-combat related situations, by suicide and by illness from service, and how TAPS has helped them grieve and move forward.

“Whether it’s a widow raising her children alone, parents dealing with the loss of their only child, a fiancé that was just beginning to start a life, or a child now without a mother or father … all our welcomed into TAPS,” Dooley said. “By joining forces, TAPS and The American Legion are working together to ensure our military survivors are cared for regardless of how or where their servicemember died. Our mission together continues and that is their legacy.”

The American Legion recently created a Gold Star Family Program with a full-time staff position at its office in Washington, D.C., who will work alongside Dooley to “elevate the critical issues of our military survivors and expand on our join effort,” she said. “TAPS and The American Legion have tremendous impact on Gold Star families across the country. Together, we can extend our services of caring for the over 90,000 military survivors under our care.”

One way collaboration will occur is by engaging Legion volunteers to serve as a mentors for kids at TAPS camps. “Our most precious population is the children of our fallen,” Dooley said. Another way is to connect American Legion veteran service officers with survivors to make sure that their benefits are properly processed.

Dooley said a trend they are seeing from TAPS families is death as a result of service illness. “Tragically, in 2019, illness is among our leading cause of death, surpassing death by suicide for the first time in seven years,” she said.

As The American Legion and TAPS begin to expand on their relationship, in closing Dooley reminded the Legionnaires that those who sacrificed for their country will never be forgotten.

“Thank you for honoring the fallen by caring for all of us that they have left behind,” said an emotional Dooley, who lost Alex five months before their wedding from a motorcycle accident on Sept. 30, 2016. “You are part of their legacy.”

“If you’ve been to one VA facility or military treatment facility, you have been to just one because they are not the same,” Place said to commission members. “No part of our systems are the same. The No. 1 complaint we get from our beneficiaries is not about access to care, but 'can you just tell me how things are done … no matter what hospital I go to.'”

“The patient is the most important part of this. Whether that’s in the research part, health-care delivery, whether it’s on the battlefield, whether it’s in the disability processing, whether it’s care in the VA after serving in the military. We see the military health system as one big key to recruiting for every element of the services,” Place said. “At the end of the day, really this is what we are about. We’re about soldiers in combat, defending the principles of America, that freedom matters. And no matter what happens on that battlefield, there will be a military health system ready to stand in and treat that (servicemember).”