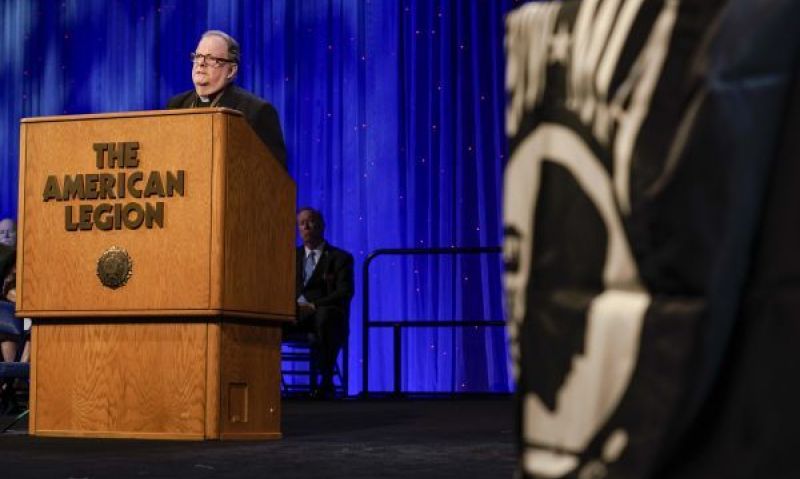 Father Philip Salois has officiated hundreds of funeral services for veterans over the years. In many of them, he references the story of Lazarus, risen from the dead by his friend, Jesus. To thousands gathered Sunday for the 2019 American Legion National Convention Patriotic Memorial Service, the priest explained his reasons – the “exceptional bonding that took place between Jesus and Lazarus, his best friend, his good buddy.”

Then, the American Legion’s national chaplain told the story of his own good buddy, a stocky soldier from the Southwest named Nick. “It was a hot, steamy day, March 1, 1970, in the jungles of Vietnam, and there was a young soldier there, who I had befriended when he first came into country. He came in shortly after I did. Nick, from New Mexico. He was part Mexican, part Native American.”

On the morning Father Salois will never forget, he and Nick were on patrol with their unit, making their way to an enemy bunker complex and “were greeted by a U-shaped ambush of enemy soldiers. And I found out that my friend Nick was one of six men separated from the rest of our unit, under heavy fire, and we were unable to reach them.”

There was no way to communicate with them. The remaining soldiers, including Salois, established a defensive line and dug in. “They were not responding. The radio was shot up. There was no way to communicate with these six men who were separated from us. So, I asked God for help,” Father Salois told the crowd Sunday. “I said, Lord, I want to go out there and help… help them come back to us. If you would only give me the courage to go out and help rescue these men, and bring me back, I will do anything you ask.”

Another soldier volunteered to join Salois. They went out, getting cover from behind, and found the stranded men. One by one, they were moved back behind the line to safety. “One of them was Nick.” Another, the lieutenant among them, had been killed. And, the national chaplain explained, “On the way back, the comrade who went out with me, was also killed.”

Twenty years later, Father Salois arranged a reunion in Ohio to honor the soldier who had lost his life in the rescue operation. Among those who came to the gathering was Nick from New Mexico. “We had a ceremony at the gravesite. It was a wonderful reunion.”

Nick gave a rose to the fallen soldier’s mother and told her, according to Father Salois’ recollection, “’I want to thank you for the gift of your son, and for Father Phil, for had it not been for them, I would not be here today.’ And so, there was a lot of weeping, tears of joy, a lot of tears of sadness for her loss, and for the lieutenant.”

At a reunion a few years later in Colorado, Nick announced that he had Stage 4 stomach cancer and not long to live. “He wanted to see us all, for one more time. And during that reunion, he asked me, ‘When I die, would you please come and celebrate my funeral mass?’ I said, ‘Of course, Nick.’”

A couple of months later, Father Salois was informed that his friend had died of cancer. “I booked my ticket to Albuquerque. The funeral mass was in a little chapel on an Indian reservation. It was all Native Americans in the congregation … a lot of family, a lot of friends. I was thinking to myself, these people were probably wondering, ‘Who was I, to come here to celebrate the funeral mass of their loved one?’ Then I explained to them the story of how I met him in Vietnam 25 years prior, and what had happened on March 1, and our subsequent reunions. It was a healing moment for the community that knew him and for the family that loved him. And there was a lot of weeping. We knew that Nick was finally at rest, was no longer in pain, and we interred him right there on the Indian reservation. It was a beautiful ceremony.”

As national chaplain, Father Salois said he had sent hundreds of cards, letters of condolences, spiritual bouquets and other messages to the families of Legionnaires who passed away during his year. “We honor each and every one of them this day. We weep for their loss, for the impact they made on our lives, the impact they made on our posts and departments. And yet we rejoice that they have entered Post Everlasting to get with the Lord forever.”

The chaplain rounded out his message with a call for those in attendance to always recruit new Legionnaires to replace those who have passed, to carry on the organization’s mission, not the least of which is honor and remembrance of those now gone.

Jaden-Ann Fraser, winner of the 2019 American Legion Junior Shooting Sports Championship in the sporter class, lit the candle of remembrance for all U.S. POWs and MIAs, and the champion Harrisburg Post 472 Color Guard posted and retired the colors.