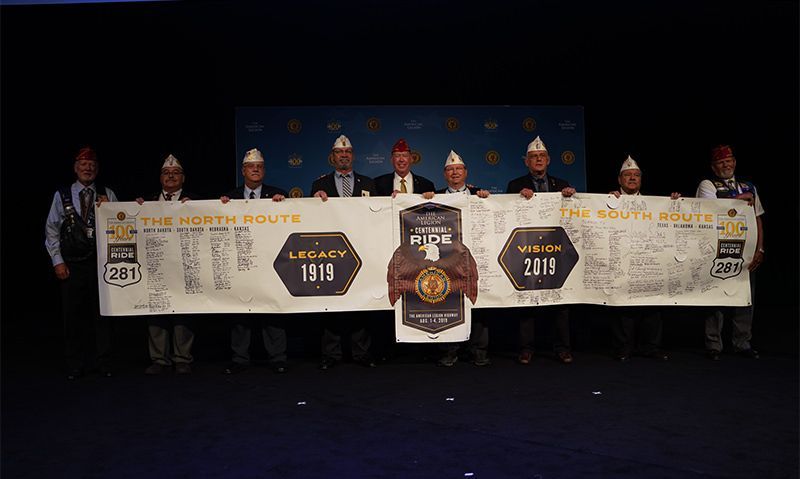 Two halves of a vinyl banner – one carried south from the U.S.-Canada border by Team Legacy and the other brought north from the U.S.-Mexico line by Team Vision – were fastened together Aug. 4 in Great Bend, Kan. On Tuesday, Aug. 27, the completed banner, signed by American Legion post commanders along the 1,875-mile American Legion Memorial Highway, U.S. 281 that was dedicated in honor of the nation’s largest organization of wartime veterans in March 1960, was presented to National Commander Brett P. Reistad.

“While it was created from one event, it represents all those Legion Family members across this nation who celebrated the centennial of The American Legion and who have drawn inspiration from the legacy created during those 100 years,” Past National Commander David K. Rehbein, chairman of the American Legion’s 100th Anniversary Observance Committee, said onstage. “Those Legion Family members have the vision implanted from that legacy to ensure that The American Legion will remain vital and necessary to this country during the next 100 years.”

“The leadership of the post there also happens to be the leadership of the local volunteer fire department and are primarily post-9/11 veterans,” Rehbein said. “The post and the fire department hosted a dinner for us. They invited local officials to share in the celebration. The following morning, the Lions Club there invited us to a pancake breakfast before we got back on the road.

“I left Red Cloud, Neb., feeling like The American Legion’s second century is in good hands there, and the message of our organization’s legacy has incubated a vision that young Legionnaires understand is timeless. While we know that this vision exists in Red Cloud, we expect that the same vision exists in many other posts and communities similar to Red Cloud all across the nation.”

Prior to the Centennial Ride banner presentation, Rehbein touched on the many ways in which communities large and small have celebrated the 100th anniversary of The American Legion over the last year.

“No matter where you go, no matter the size of the post or the budget of the department, The American Legion centennial has been celebrated in ways that would make our founders proud,” he said.

His message also covered the ongoing nationwide travels of centennial exhibits that share the story of the GI Bill, the Legion’s history and of American Legion Baseball. “During its travels to date, we estimate that the (GI Bill) exhibit has been viewed by more than 1 million people,” he said. “These exhibits and others will continue to travel through the remainder of the centennial celebration and beyond. In cities and towns where they have been displayed, the exhibits have proven to be magnets for community interactions and special events.”

The American Legion’s centennial celebration officially comes to an end on Veterans Day 2019, but Rehbein said work will continue to help posts and departments understand the organization’s history and how legacy can drive a vision for the future, long into a second century.