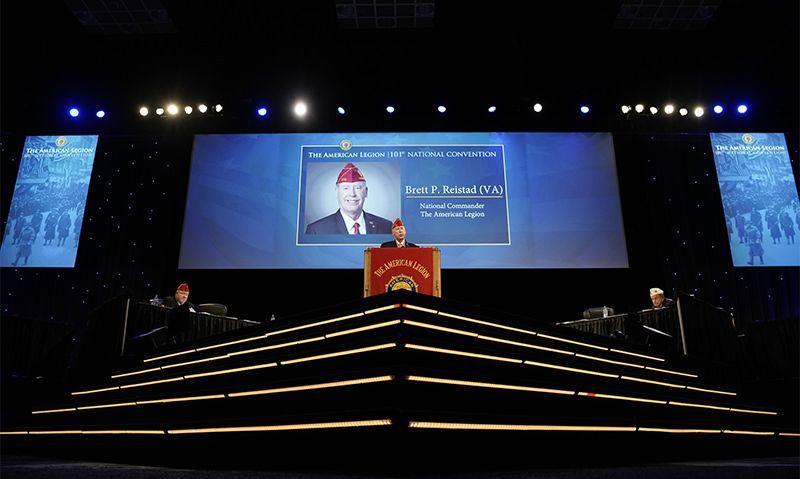 In the year in which The American Legion turned 100, National Commander Brett Reistad pointed to historical achievements during his remarks to delegates at the organization’s National Convention in Indianapolis on Aug. 27.

“We’ve always believed a veteran is a veteran,” Reistad said, referring to the LEGION Act, which was created to properly honor the approximately 1,600 servicemembers killed or wounded during previously undeclared periods of war. “It doesn’t matter to us whether you served in New Guinea or in New Jersey. The willingness to put your life on the line is inherent in your willingness to serve.”

Reistad also noted the VA Mission Act, another piece of major legislation fought for by The American Legion.

“The system needed a modernizing facelift to better serve veterans of all generations,” he said.

“By reforming VA health-care infrastructure, streamlining community care, expanding caregiver benefits, increasing access to private-sector care and recruiting quality health-care professionals, Congress and the White House are living up to President Lincoln’s mission to ‘care for him who shall have borne the battle, and for his widow, and his orphan.’”

Additionally, a 1920s-era war memorial, conceived and erected by Legionnaires and Gold Star Mothers, was allowed to remain in place in Bladensburg, Md., thanks to a landmark ruling by the U.S. Supreme Court.

“Just as our predecessors ‘paid it forward’ to ensure that America’s future veterans are taken care of, we ‘paid it backward’ to ensure that they continued to be honored as their families and fellow veterans intended,” Reistad said, referring to the Bladensburg World War I Veterans Memorial that honors 49 Prince George’s County men who made the ultimate sacrifice.

The commander also noted how American Legion members came together to support the Coast Guard when the government shutdown cut off their paychecks. Temporary Financial Assistance grants were quickly processed and delivered.

“Families have always been important to The American Legion – especially military families,” he said. “That’s why when the government shut down, we stood up for the United States Coast Guard. Earlier this year we provided more than $1 million of financial assistance to Coast Guard families with children. Keep in mind this was $1 million more than the government provided during that same period. They were eventually paid, but it was immoral to delay the well-earned compensation to those who risk their lives defending our shores.”

Reistad noted that The American Legion is still pressing Congress to approve the Pay Our Coast Guard Act to prevent a similar situation occurring again.

All of these achievements and others are possible thanks to the size and influence of The American Legion.

“That tells you something about the esteem and respect that Congress and the American people have for The American Legion,” he said. “So please support The American Legion by purchasing these rare and collectible coins. Time is running out and the unsold inventory will be melted down by the U.S. Mint at the end of the year.”

While the centennial celebration is winding down, contributions by The American Legion most certainly are not.