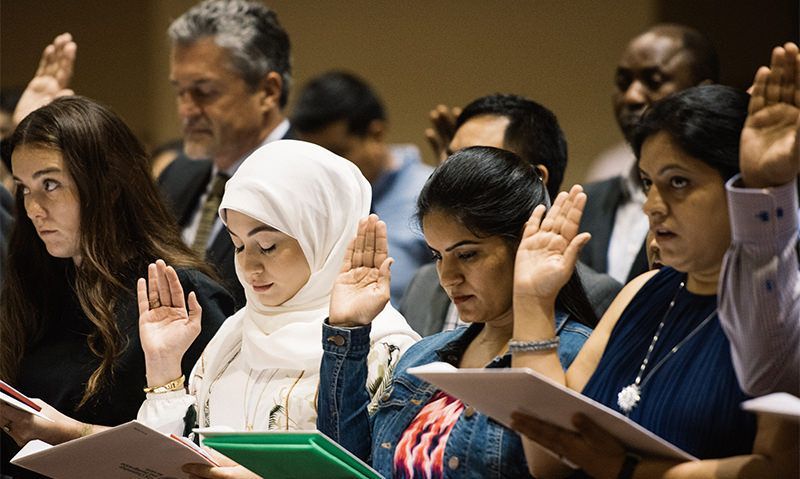 Attendees take the Oath of Citizenship lead by Honorable James R. Sweeney II at the Naturalization Ceremony held in conjunction with the 101st National Convention of The American Legion in Indianapolis, August 27, 2019. Photo by Josh Marshall/The American Legion

Second-year pre-med student Dua Tariq led the Pledge of Allegiance in a room of more than 150 people. The 19-year-old student, who attends Indiana University Purdue University in Indianapolis, was born in Pakistan and moved to the United States with her parents when she was only a few months old. Tariq was one of 99 people becoming naturalized U.S. citizens during a special ceremony held in conjunction with the 101st National Convention of The American Legion in Indianapolis Aug. 27 at the Indiana Convention Center.

“I realized how privileged it is to be a U.S. citizen. I can vote, I can have a voice,” said Tariq, who wants to go to med school in Indiana and become an anesthesiologist.

The Hon. James R. Sweeney II presided over the ceremony that involved Legion Family members, the 99 citizens and their families.

Sweeney, a retired Marine colonel and Paid-Up-for-Life American Legion member, shared in his remarks how many in the room came from places such as Mexico, Zimbabwe and the Philippines, to name a few. “You are now citizens and part of the Indiana family,” he said. “All of you came for freedom. I’m proud to be among the first to greet you as my fellow Americans. You have the rights and freedoms to enjoy as Americans … there’s nothing you cannot achieve. With citizenship there’s also a profound responsibility. Each year over 700,000 naturalized Americans take the oath of allegiance and prepare for the same rights, liberty and justice of generations of Americans, including the Legionnaires who came to this convention who fought in the name of freedom. Freedom is not free. Nor does it come without sacrifice.”

Tuesday’s naturalization ceremony was the first one The American Legion National Headquarters has helped put on, which was made possible by the Americanism Commission.

“It’s very special today to welcome all of you as U.S. citizens … enjoy the fruits of this great country … liberty and the pursuit of happiness,” said Richard Anderson, Americanism Commission chairman.

Sweeney added in his remarks that “The American Legion was founded by war-weary veterans who were once an American expeditionary force who fought along foreign shores for American ideals of peace, freedom for all, of which their foundation of pillars includes Americanism. Coupling this naturalization ceremony) with The American Legion’s 100th year and 101st National Convention makes it that much more special.”

After the Oath of Citizenship was administered, additional remarks were provided by representatives of local dignitaries. Sen. Todd Young, a Legionnaire, was unable to attend the ceremony but provided written remarks that were read aloud.

“I know your journey to this day has been long and often difficult. America is called the land of opportunity because every individual, regardless of their background, has a chance to make a new life for themselves and their families,” Young wrote. “Not only am I proud to call you a fellow American, I’m proud to call you a fellow (Indiana) Hoosier.”

Obtaining U.S. citizenship was emotional for Adriana Hernandez, who is originally from Mexico. “It was a big day for me,” said Hernandez through tears. “I waited 16 years for this.”

For David Aramant of Sweden, who has lived in the United States for 32 years, he became a citizen to be more politically active.

After each new U.S. citizen received their certificate of naturalization from Judge Sweeney, they had an opportunity to register to vote.

“The magic of the United States of America is that we are all equal. We have equal voice, we have equal vote,” said Jeff Stranton, who was representing the Clarence Cook Chapter of the Sons of the American Revolution.

After the new U.S. citizens and their families enjoyed refreshments following the ceremony, Sweeney shared why he loves his job.

“This is the best thing that I get to do, to welcome in new citizens,” he said. “It’s amazing to hear all of their different stories and what they have gone through to be here … they don’t take it for granted.”