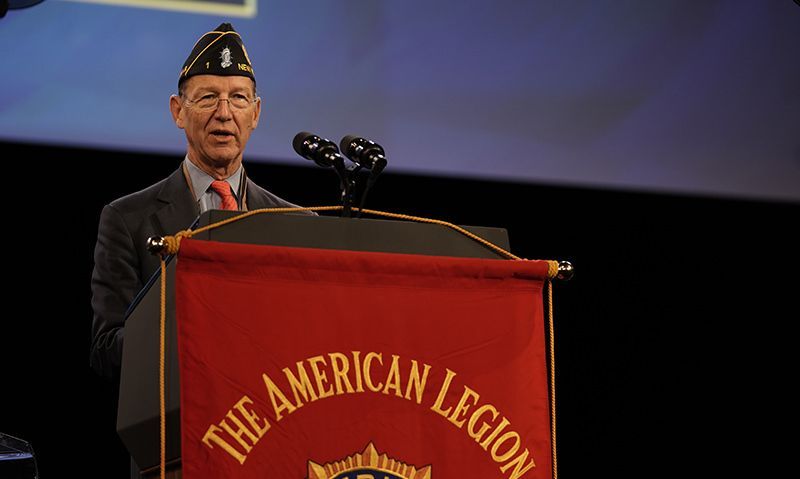 “Honoring our history should not be an impediment to speaking to our present and future vets,” Roosevelt IV said at the 101st American Legion National Convention. “In fact, honoring our history requires that we stretch, adjust and do what it takes to stay on mission.”

He told the crowd that one thrust of the honorary committee has been to explore ways to maximize relationships with such post-9/11 groups as Student Veterans of America, Team Red White and Blue, Team Rubicon and The Mission Continues. The National Executive Committee passed a resolution in May 2015 that originated with the national 100th anniversary committees encouraging local posts to coordinate and work with those groups wherever feasible. In many communities throughout the country, American Legion posts have, for example, sponsored young veterans to attend the annual SVA national conference, and many have offered their post homes to SVA chapters for meetings and other gatherings. Many Legion posts have also conducted community-service, disaster-relief and fitness activities with The Mission Continues, Team Rubicon and Team RWB.

“Engagement with the newest generation of veterans – communicating across generational lines, across technologies, across cultures – is essential,” Roosevelt IV said. “We can’t understand younger vets unless we are hearing directly from them, and that means their generation needs leadership roles in The American Legion.”

Roosevelt IV explained that he and his fellow veterans “seemed to speak our own language” when they came home to restart their civilian lives after the Vietnam War. “It felt as though our DNA was changed in ways only ‘Nam vets understood.

“Other vets from other generations were our comrades, but we needed acknowledgement of what was specific to Vietnam, what was left behind there, what remained an obstacle to a healthy return for so many,” he said. American Legion-driven initiatives after the Vietnam War to demand government accountability for Agent Orange exposure, establish recognition and treatment programs for post-traumatic stress disorder and to honor women who served in Southeast Asia through support for the Vietnam Women’s Memorial in Washington, D.C., are examples of ways in which the organization adjusted to serve his generation without compromising fundamental values.

Roosevelt IV encouraged his fellow Legionnaires to make the most of social media and to continue engaging with the newest generation of veterans through such focus groups as the organization’s 21st Century Task Force under the national Internal Affairs Commission.

“I have full faith in the timeless foundation that was laid by those who returned from World War I and by each subsequent generation of the Legion,” he said. “The mortar of this association is our devotion to one another. It is the gift of The American Legion.”