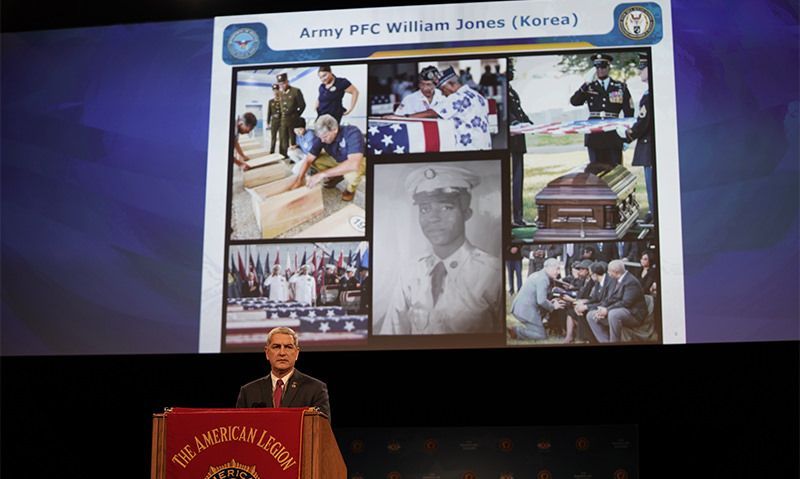 At 20-years-old, twin brothers from Lincoln, Neb., perished on the USS Oklahoma when the ship was attacked and sunk in Pearl Harbor on Dec. 7, 1941. Their remains were recovered and buried as unknowns in a Honolulu cemetery.

Through the tireless efforts of the Defense POW/MIA Accounting Agency (DPAA), the young brothers’ remains were disinterred in 2015. And on Aug. 10, the brothers were buried in their family's cemetery in Nebraska, where their 93-year-old sister and many other family members were present.

“They made the supreme sacrifice and together, they are now home,” said DPAA Director Kelly McKeague to delegates at the 101st National Convention of The American Legion in Indianapolis Aug. 29. “The fact that the United States of America vigorously pursues this noble mission is the right thing to do, and it defines us as a nation. This serves as a marker to those of us who are veterans, as well as to those who serve in uniform today, that this nation will never forget and never leave a fallen warrior behind.”

The number of missing Americans from World War II to today’s present conflicts is 82,000. Of that number, McKeague said an estimated 39,000 are recoverable as the others are deep sea losses. “Each one of those 39,000 losses, along with the others, represents a unique story that transcends generations and time,” McKeague said. That time is a deep loss for families of the missing that won’t heal until their loved one is accounted for.

The DPAA works with 46 countries where Americans went missing in combat. With 5,300 servicemembers still missing from North Korea, the United States is working to achieve an agreement with the North Korean field army in effort to resume field operations by next spring. Last field operations were conducted in 2005. However, 55 transfer cases of U.S. servicemembers’ remains returned to the United States from North Korea last August, of which 32 have been identified – the first was Master Sgt. McDaniel from Indiana. McKeague said scientist expect that “in those commingled remains are the DNA sequences of 250 individuals.”

McKeague applauded the Legion’s dedication and support for those servicemembers still unaccounted for.

“Let me thank profusely The American Legion for your staunch support to your missing comrades and to their families,” he said. “Thank you for strongly advocating your members of Congress how vitally important this mission is. Thank you for flying the iconic POW/MIA flag over your posts and for attending the burials of our returning servicemembers.”

McKeague also recognized Legion posts and Auxiliary units in Hutchinson, Kan., who raised money to fund the installation of an eternal lamp at the county POW/MIA memorial in the town. “Your commitment at all levels truly makes a difference not only to our POW/MIAs, but more importantly to their Gold Star families," he said.

McKeague added that across the world DPAA is partnering with universities and private entities to “do more research, more investigations and more recoveries.” Today, 180 DPAA and partner professionals are deployed in eight countries with teams from Laos and Solomon Islands returning home with remains in the last few weeks that they recovered from their respective missions.

The American Legion, “you do take care of veterans. And the fact these are unreturned veterans who you care for speaks volumes to your passion and dedication to this mission,” McKeague concluded.