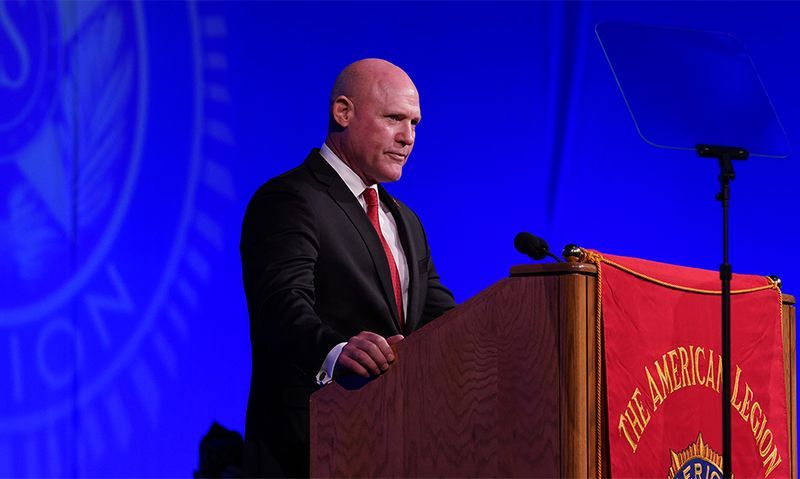 For Micheal Barrett, who served as the highest-ranking enlisted man in the Marines from June 2011 to February 2015, it was the second time in three months he’s taken to the podium either on behalf of, or addressing, The American Legion. A member of American Legion Post 18 in Bloomington, Ind., Barrett was in Indianapolis in late May to help announce a new veteran suicide-prevention collaboration between The American Legion and Chip Ganassi Racing.

He said at the time the issue was very personal to him, having lost three of his longtime friends he served with in combat overseas to suicide. In Phoenix, he reminded Legionnaires to reach out to their fellow veterans as often as they can.

“Twenty veterans die by suicide every single day,” Barrett said. “This is a call to action. We are veterans. We are Legionnaires. If you haven’t already, add to your basic daily routine conducting Buddy Checks. Make sure your buddy, your brothers, your sisters are OK.”

Barrett, who did multiple tours in Iraq and later served in Afghanistan, said despite the last U.S. troops leaving Afghanistan one day earlier, “the world is a dangerous place. And it’s not getting any nicer. We have left the battlefield. However, we cannot leave the global war on terror. We may want to be done with it, but they are not done with us. The ugly history (of terrorist attacks against the U.S.) proves this.”

He also referenced the 13 servicemembers killed Aug. 26 during a suicide bombing at the airport in Kabul, Afghanistan, which brought back difficult memories for him.

“Thirteen families received the most devastating news this past week,” he said. “I was, three times in my 34-year career, that Marine Casualty Assistance Call Officer on the other side of the door knocking. I don’t wish that responsibility on anyone. My heart breaks for all of our Gold Star Families and all of our severely wounded.”

But despite risking life and limb, Barrett said the U.S. servicemember continues to volunteer, knowing full well what the cost might be. And the country needs that.

“Our nation needs people willing to walk where lightning strikes, drawn to a sense of duty,” he said. “A minute doesn’t pass where I’m not wowed by the selflessness, the courage and endurance of our 21st century hunter-warriors. And their families and the loved ones, they remain strong and focused, and not a day goes by where their sacrifices are not known and cherished. Having to say goodbye again and again and again to your loved ones is a hell of a thing to have to endure.

“Today’s warriors have chosen to be defenders of the Constitution and servants to the nation. There’s nothing stronger than the heart of a volunteer.”