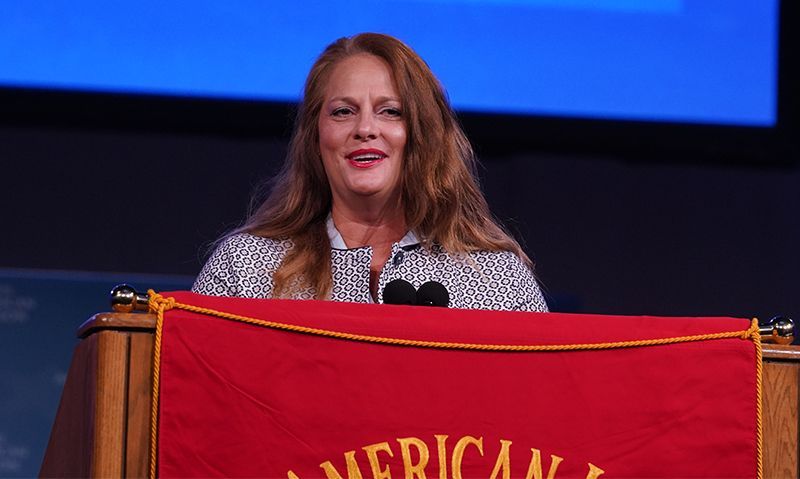 As the largest VA purchase lender, the mission of Veterans United Home Loans is to help veterans use their earned benefits to achieve the American dream and come home, said Pam Swan. And as the spouse to a retired Army veteran and Legionnaire, Swan knows how important those benefits are to military families.

Swan shared with Legionnaires at the 102nd National Convention in Phoenix Sept.1 that since the creation of the VA Home Loan program in the original GI Bill, the VA loan has been utilized more than 25 million times. And just last year, for the first time, veterans used their VA benefit over 1 million times.

“The GI Bill has been the cornerstone of our success. And without the Legion there would be no GI Bill,” said Swan, vice president of Military Relations and Business Development for Veterans United Home Loans. “It put veterans on a path to success. It greatly expanded the reach and importance of the VA, transforming it from an organization with a limited mission to one that stands side-by-side with veterans throughout their lives. For many veterans, that path includes home ownership.”

Swan thanked The American Legion for “its role in creating and protecting the GI Bill for generations of American veterans and their families. For over a century the Legion has used its platform to enhance the lives of our veterans, their families and our military. Every year the Legion works to protect and expand hard-earned and well-deserved benefits. Not all the work the Legion has done has been well known or is instantly impactful as the GI Bill.”

In May, Veterans United Home Loans joined The American Legion’s mission to help reduce veteran suicide. “We pledged $2 million dollars to build on the great work the Legion is already doing,” Swan said. “This will allow the Legion to expand programs and opportunities for Legionnaires. It will increase opportunities for peer-support training. It will help distribute important mental health and wellness tools and resources through The American Legion’s infrastructure. In other words, it will save lives.

“Without the Legion’s advocacy over the years, without Legionnaires bravely taking stand to address mental health issues that can lead to suicide thoughts, this program wouldn’t exist. This program couldn’t exist.