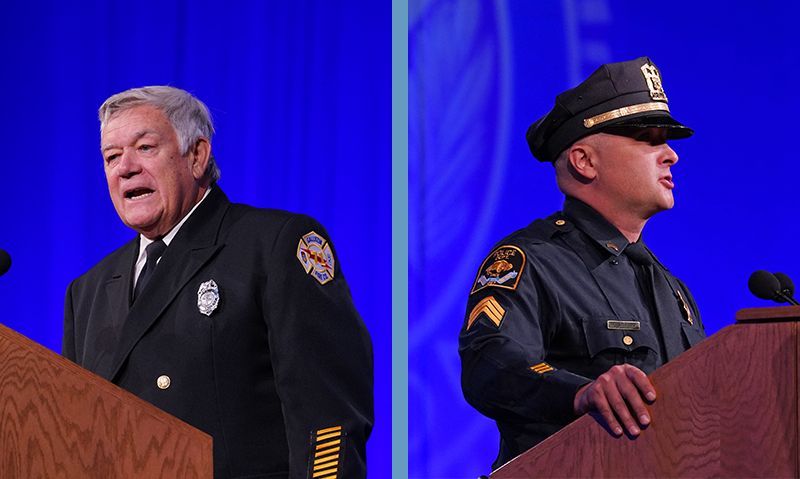 A Nebraska police officer and a Pennsylvania firefighter were honored by The American Legion on Sept. 1 during the organization’s national convention in Phoenix.

The National Law Enforcement Officer of the Year was presented to Omaha (Neb.) Sgt. Daniel Martin, a 17-year law-enforcement veteran. Martin works in the Gang Unit and in 2020 he joined with his crew in the recovery of more than 80 firearms, the arrest of over 150 felony and 275 misdemeanor and traffic offenses, and the recovery of more than $750,000 worth of narcotics.

He and his fellow police officers also found the time to collect sporting equipment, built basketball courts and arranged shopping and social events as youth alternatives to gang activity.

“America is blessed to have so many amazing and dedicated police officers and firefighters,” American Legion National Commander James W. “Bill” Oxford said. “Their split-second decisions can mean life or death and often invite intense scrutiny. Bad officers dominate news coverage, while good officers are often not given their due recognition.”

Martin said he was “honored and humbled to accept this award. And I’m honestly a little bit shocked. And after 17 years as a law-enforcement officer, I can honestly say that nothing shocks me anymore. Standing in this room, at this podium in front of all of you – veterans of the armed forces, veterans of combat and war – I feel a little undeserving of this honor. I’m sincerely grateful for your service.”

The National Firefighter of the Year Award was presented to Robert Nagle, a certified instructor with the Gallitzen (Pa.) Fire Department.

A Vietnam War U.S. Army veteran, Bronze Star recipient and member of American Legion Post 174 in Gallitzin. As an instructor, he has used his extensive experience to teach the art of firefighting to many of his colleagues. He’s also served as president of the Cambria County Volunteer Firemen’s Association.

“Few acts require greater bravery then entering a blazing building,” Oxford said. “Imagine the fortitude that it requires to serve as a firefighter for 56 years. The man that we are honoring today has done that and more.”

Nagle used part of his remarks to bring attention to the upcoming 20th anniversary of the 9/11 terrorist attacks. “The New York City Fire Department lost 343 firefighters. Police officers and Port Authority officers also passed away on that terrible day,” he said. “(They) did what most people don’t: they ran into a building when others run out. They never shirked their duty. Many knew that on that day there was going to be loss of life. And they continued to do their duty. They’re brothers-in-arms, and I will always remember them.”