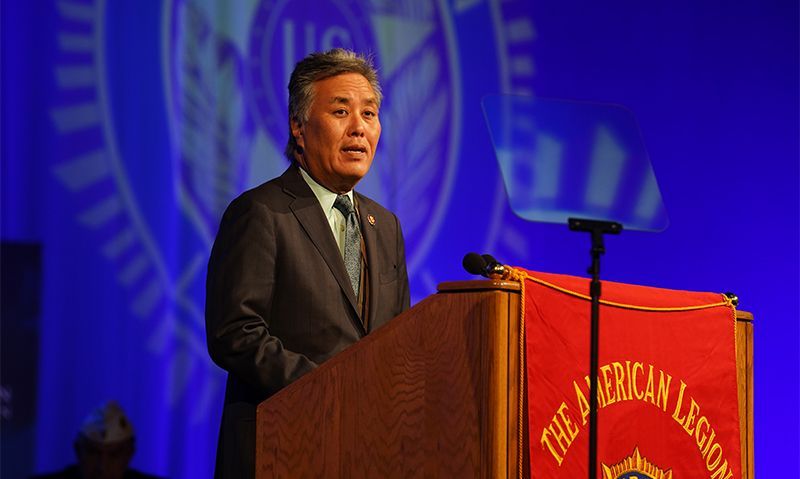 Standing in front of delegates to The American Legion National Convention in Phoenix, U.S. Rep. Mark Takano addressed improvements made in health-care for veterans, and he and other members of Congress’ top priorities for the providing of care and benefits for those who have served in the U.S. military.

But the chairman of the House Committee on Veterans’ Affairs (HVAC) also had a message regarding veterans of the war in Afghanistan, just days after the last U.S. servicemember left the country after a 20-year war.

“In the days and weeks following our exit, we must remember that compressing 20 years of our involvement in Afghanistan into three weeks of evacuations was always going to be messy, but this does not diminish the honorable service of the hundreds of thousands of veterans who answered our nation’s call and left behind their families and communities,” Takano said. “This is a difficult time for many who served and those who supported their loved ones in Afghanistan. Please join me in reaching out to the veterans in your lives. Check in with your buddies. And if you need help, please know that it is okay to not be okay right now. VA’s Veterans Crisis Line is always there at 1-800-273-8255.”

Takano referenced The American Legion’s push to have Buddy Check legislation enacted by Congress, and in urging its members to continuously reach out to fellow veterans as one step toward reducing veteran suicides.

“The American Legion has been stalwart in calling for its members to be there for each other with Buddy Check Week, and I commend you for this constant reminder that connecting with each other is one of the most protective ways we can support veterans’ mental health and well-being,” he said. “This is especially true given the latest news from Afghanistan. In the 116th Congress, the (HVAC) worked tirelessly to develop and pass the Veterans’ COMPACT Act and the Commander John Scott Hannon Veterans Mental Health Care Improvement Act into law. These bipartisan bills were incredibly strong first steps to reduce veteran suicide, but as long as 17 veterans die by suicide each day, our work must continue.

“This year, we’ve continued our efforts and already passed Rep. Axne’s Sergeant Ketchum Rural Veterans’ Mental Health Act into law to increase access to mental health care in rural communities. I also know that one of the most stressful periods for servicemembers occurs during their transition to civilian life. That’s why I introduced the Ensuring Veterans’ Smooth Transition Act or EVEST. By automatically enrolling veterans into (Department of Veterans Affairs) care during their transition, we can ensure they are connected to the VA system and its critical mental health resources, hopefully preventing these veterans from falling into crisis. (Veterans service organizations), including The American Legion, have been fighting for this for years, and I’m grateful to have you behind my bill. With this very simple step we can make VA’s resources more accessible to veterans at a time that is known to be difficult.”

Takano said legislation he championed, the SAVES LIVES Act, gives VA the authority to vaccinate all veterans, caregivers, and veteran spouses for this and future pandemics. “VA quickly became a national leader in vaccinations with this expanded authority, and I’m glad I could work with VA to ensure all of you could get a vaccine as soon as possible,” he said. “Please, if you haven’t already, I strongly encourage you to get the vaccine.”

Additional legislation gave VA the necessary resources to handle an increase in patients who delayed getting care during the pandemic.

“Because of the American Rescue Plan, we have provided VA with the resources needed to handle the influx of patients due to many delaying their care due to the pandemic,” Takano said. “As compensation and pension exams were delayed, we provided additional resources to help the National Personnel Records Center and VA get through the backlog, so veterans and their survivors can access critical benefits. We worked with VA to waive copays for veterans seeking care during the pandemic. There’s no surprise bill coming your way, and if you already paid your copays, VA will reimburse you. We were also able to provide emergency funds to help student veterans as their schools closed due to the pandemic.”

Takano said the pandemic gave VA a chance to show its ability to adapt to a global pandemic, the success it has providing long-term care and its ability to care for civilians during a national emergency.

“While our nation’s nursing homes and state veterans homes were hit particularly hard by the pandemic, VA’s own Community Living Centers experienced minimal outbreaks and spread of infection,” Takano said. “It quickly became clear that VA has the know-how and expertise, exemplified by its talented medical staff, to provide superior long-term care. I’m so grateful these providers could share this wealth of knowledge through VA’s fourth mission. I’m certain that this support to nursing homes and state veterans homes across the country saved lives.”

·       Create a more welcoming VA and build equity for veterans;

·       Improve VA’s management and oversight; and

“The foundation for all of our work depends on creating a VA that is welcoming and safe for all veterans that enter its doors,” Takano said. “Our veteran population is rapidly changing, with more women, LGBTQ+, Black, Asian, Hispanic and Native veterans than ever before. It’s clear that VA needs a cultural change, and I believe that we have seen so far that Secretary (Denis) McDonough is making efforts to lead VA in that direction. No veteran should face barriers accessing the care or benefits they’ve earned, and no VA employee should face discrimination in the workplace. We have to look back to learn about past disparities, figure out how VA can rectify them, and work to ensure that all veterans – regardless of gender, sexuality, gender identity, race, housing status, or citizenship – can access VA equitably.”

Takano also spoke on behalf of veterans who have served the nation honorably but were later deported because they failed to gain U.S. citizenship. “We must not leave anyone behind in this work. That includes our deported veterans,” he said. “Despite serving our nation honorably, non-citizen veterans are still exiled from the country that they call home and fought to defend. They face significant barriers to access the benefits they are entitled to and eligible for under the law. I reintroduced the Veteran Deportation Prevention and Reform Act because their service matters too. I want to thank The American Legion for supporting this critical legislation, and I want to thank you for your commitment to honoring the promises we made to our veterans, regardless of their citizenship.”

Along those lines, Takano said legislation he introduced, the Korean Valor Act, would correct “a decades-long gap in VA’s Allied Beneficiary Program and begin to rectify significant inequalities between our European and Asian allies living in the United States. For 63 years, veterans of Allied Forces from World Wars I and II have been able to enroll in VA healthcare. Yet today, veterans of the Republic of Korea—who fought alongside us in the Vietnam War and who also went on to become U.S. citizens—they are denied what their European counterparts already have: that is access to veteran-centric, high-quality care from VA. Over 300,000 Koreans fought alongside the United States in Vietnam. Nearly 3,000 of these veterans are now U.S. citizens but exist in a limbo—unable to receive care from either the Korean health-care system or VA. Providing care to these veterans will set a crucial precedent: that Americans stand by their allies and welcome them with open arms.”

Takano called passage of the Blue Water Navy Vietnam Veterans Act was a “major” accomplishment in providing veterans with benefits due to toxic exposures. ”But this victory is bittersweet,” he said. “Our Vietnam veterans shouldn’t have had to wait over 40 years to access the care and benefits they earned, and for many, it was too late. I’m going to tell you right now I will not let our post- 9/11 veterans suffer the same fate. The cost of war is so much more than just the tanks and guns used in the heat of battle. For the veterans living with toxic exposure today, they still are in the heat of battle, and they’re paying the price that our nation should be paying. When we send our servicemembers into harm’s way, we do so with a promise to care for them—and pay for that care—when they come home.

“My Honoring our PACT Act finally recognizes toxic exposure as a cost of war, and I’m so grateful to have the support of The American Legion. Our bipartisan bill will finally provide health care to more than 3.5 million veterans exposed to burn pits and airborne hazards and will concede exposure that is long overdue. It will establish a presumption of service connection for 23 respiratory illnesses and cancers, and crucially, it will overhaul VA’s presumptive decision-making process, so Congress doesn’t have to keep intervening.”