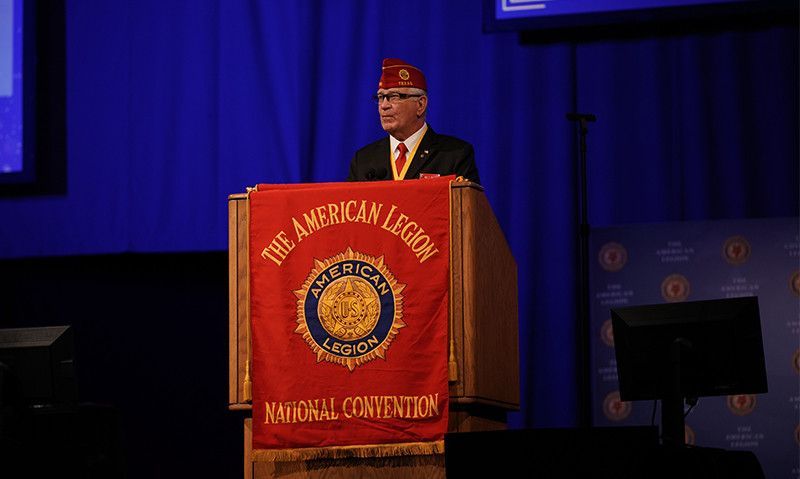 As he looked back over his year as American Legion national commander, Texas Legionnaire Paul E. Dillard told delegates to the organization’s national convention in Milwaukee that passage of the PACT Act was a monumental accomplishment for the American Legion Family.

But it was not, by far, the organization’s only accomplishment over the past 12 months.

“We did it. YOU did it. The American Legion Auxiliary did it. The Sons of The American Legion did it,” Dillard told the convention floor. “Thanks to your congressional visits, letters, phone calls, e-mails and hard work, the Sergeant First Class Heath Robinson Promise to Address Comprehensive Toxins Act of 2022 is now law. It would not have passed Congress without you.

“Now, an estimated 3.5 million veterans exposed to burn pits can get the benefits they deserve. The same goes for those exposed to Agent Orange, radiation, and other poisons and toxins. When I ran for national commander, I did so on the platform of ‘No Veteran Left Behind.’ The PACT Act will ensure that millions will not be.”

Dillard also pointed to victories via the nation’s highest court. He noted the U.S. Supreme Court, in Texas vs. Torres, the ruled that a former state trooper had the right to sue his state after it refused to rehire and accommodate him following health conditions that incurred while he was deployed.

“The ruling was a perfect response to national Resolution 85, passed at our Reno (national) convention in 2017, which calls for the strengthening of re-employment rights for Guard and reserve members returning from deployment,” Dillard said. “It is just another example of our America Legion delegates being ahead of our public policymakers.”

Dillard also mentioned another Supreme Court ruling in Kennedy vs. Bremerton School District that he said protected the right of a high school coach to pray on the football field during games. “The coach happened to be a veteran, though we support the right of all Americans to practice their faith in a manner that is guaranteed by our First Amendment,” he said. “When veterans are denied their constitutional rights, it meets my definition of veterans left behind.”

Dillard also asked Legionnaires to continue to push the Legion’s “Be the One” veteran suicide-prevention initiative and pointed to a letter to The American Legion Magazine from a Florida Legionnaire who survived a suicide attempt after learning he was about to be homeless due to undiagnosed PTSD. In his letter he wrote, “Most days I am grateful I survived. Thanks to VA treatment, I was able to reconstruct my life.”

Dillard said examples like this are “why we have Buddy Checks. This is why it is so important that we check on the wellbeing of our fellow veterans. Very few of us are professional therapists, but we do know how to listen and ensure that veterans in crisis get to the VA or other qualified counselors.”

Turning to membership, Dillard pointed out that signing up new members isn’t good enough, calling it “only a band-aid approach if you don’t make that member feel welcome. Attend a couple of post meetings with those new members. Sit next to them. Don’t just call them when it’s time to collect dues. If they feel like family, they will stay in the family.”

Dillard said he’s seen plenty of examples of support and love for The American Legion – whether rooting for the Legion’s INDYCAR program, in France for D-Day, through American Legion youth programs and from those assisted by the organization’s service officers.

“We need to do a better job codifying their love into membership,” Dillard said. “Even people who are not eligible are usually close to someone who is. And with the LEGION Act, millions and millions of people are eligible to be members of the American Legion Family.”