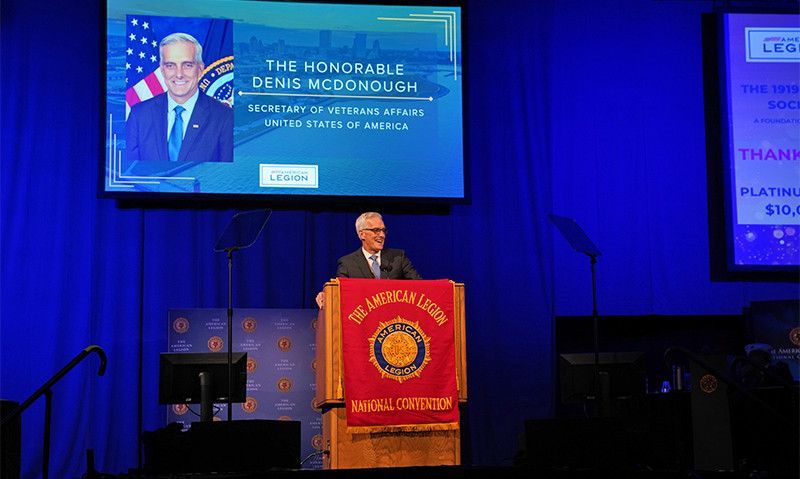 Editors Note: VA Secretary Denis McDonough recorded a special episode of the Tango Alpha Lima podcast. Download and listen to him discuss "Be the One" and implementing the PACT Act.

Among the core questions Department of Veterans Affairs (VA) Secretary Denis McDonough asks himself and his staff each workday is, “Are we fighting like hell for those who fought for us?”

“That’s our North Star,” McDonough said during his address at the American Legion’s 103rd National Convention on Aug. 31. “That’s how we’ve gotten to where we are. And that’s how we’ll get where we’re going in the future.”

McDonough mentioned victories VA has seen over the last year and praised The American Legion for its support and advocacy on behalf of veterans, their families, caregivers and survivors.

“You are some of our nation’s premier advocates for veterans, their families and, really, for all Americans,” he said. “I thank you for all you’ve done, for your partnership and for all I know you’ll do in the future.”

One of the most notable victories was this month’s signing of the historic PACT Act into law. The sweeping toxic exposure legislation provides a comprehensive framework to improve the presumptive process for burn pit veterans by streamlining access to health-care benefits for those who served in areas of known toxic exposure — regardless of disability status — and provides health care for as many as 3.5 million veterans exposed to airborne hazards and burn pits.

“You helped see to it that the PACT Act made it to the president’s desk and became a law that will deliver care and benefits to millions of toxic-exposed veterans and their survivors,” he told Legionnaires.

“You know from your own firsthand experience that while vets were off fighting for us, many were breathing in toxic fumes from burn pits and other sources,” said McDonough. “Then months or years later, developed conditions that followed you home from war, impacted your lives and in some cases, took the lives of those you served alongside and loved long after the guns fell silent.”

Now, McDonough said, it is the job of the nation and VA to provide these veterans, families and survivors with the benefits and care they have earned. Because of the PACT Act, VA now recognizes 20 new presumptions of service connection for toxic exposure-related conditions. This will alleviate the burden of proof from the veteran and bring generations of new veterans into VA health care while increasing the benefits and improving outcomes for many more. To support one of the biggest expansions of veteran benefits in history, VA is investing in workforce and infrastructure.

McDonough announced VA will make all conditions outlined in the PACT Act presumptive from the date President Biden signed the bill into law on Aug. 10. The initial plan was to phase-in conditions over the next few years, but the secretary said those in need have waited too long.

“I want to be very clear on this point, because it’s an important one,” he said. ‘The conditions in the PACT Act were supposed to take effect over the next few years, but we’re not going to do that. Veterans have waited too long for this care and these benefits already, and we’re not going to make them wait any longer.”

Another way McDonough is striving to improve care for veterans is ensuring VA is an inclusive place where all veterans feel welcome. To do this, says McDonough, it means getting women veterans the care they’ve earned and deserve and ensuring LGBTQ+ veterans feel supported and well-served by every part of VA. Additionally, says McDonough, it means investigating, identifying, and eliminating racial disparities at VA and identifying ways to prevent them in the future. Helping non-citizen veterans remain in the U.S. and ensuring deported veterans have access to VA benefits are also among the department’s priorities.

The VA secretary praised The American Legion for the organization’s “Be The One” campaign and taking the lead in the fight against veteran suicides. The campaign empowers everyone to save the life of a veteran at risk. More than 6,000 veterans die by suicide annually. That number, said McDonough, is devastating.

“That report also reminded me of something else,” he said. “Suicide prevention is possible, that there is hope.”

“That’s 399 vets who are alive today … getting a second chance at life. Nothing — nothing — could matter more than that.”

If you are having thoughts of suicide, call or text 988 then press 1 for veterans or visit http://www.veteranscrisisline.net/. For emergency mental health care, you can also go directly to your local VA medical center 24/7 regardless of your discharge status or enrollment in other VA health care.