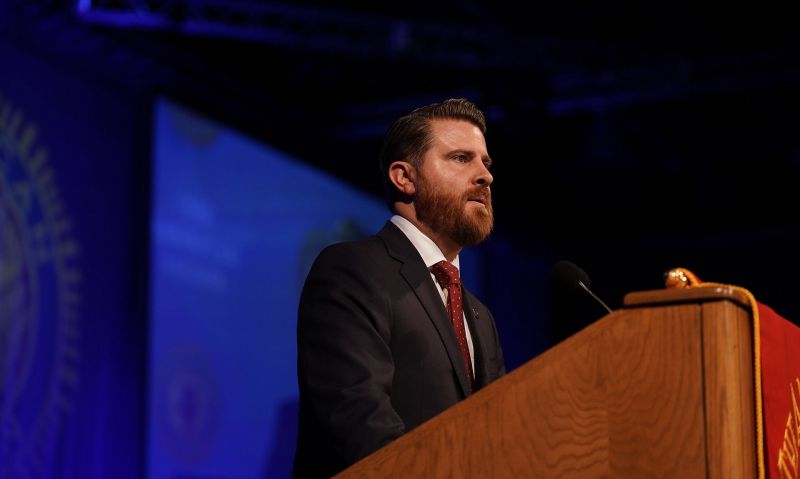 In April, the White House announced the formation of the new Task Force Movement: Life-Cycle Pathways for Veterans and Military into Trucking. The initiative brings together stakeholders from the federal government, the trucking industry and veteran service organizations. As part of TFM, the first day of The American Legion’s Higher Education & Credentialing Summit on Aug. 31 focused on how veterans can help solve staffing problems in industries related to the supply chain.

The summit was held in the Hilton Milwaukee in conjunction with the 103rd National Convention. Student Veterans of America President/CEO Jared Lyon singled out as an “underserved population” Persian Gulf War veterans, now entering their early 50s. Statistically, they were less educated than surrounding cohorts due to the strength of the U.S. economy at the time, and Lyon said they are “hungry to retool, hungry to retrain.” He also reflected the theme of the day: that “veterans and their families can be a real solution” to the issues affecting the supply chain.

U.S. Secretary of Transportation Pete Buttigieg sent a video message in which he emphasized “strengthening our supply chain” and the global – not just national – stresses on it, from the climate to the pandemic. After the message, TFM program leaders and others discussed the Biden-Harris Trucking Plan and how veterans fit into it. The running theme of the summit, as it is the impetus behind TFM, is removing what were variously referred to as impediments, obstacles and red tape between veterans and trucking jobs. TFM Chairman Patrick Murphy called the public-private partnership “a defining moment in our nation’s history.” The trucking industry is currently 80,000 employees short of what they need and may be 300,000 short in 10 years. He reminded the audience that 100% of goods are transported by truck at some point in the process (the “last mile”).

Carolyn Renick, the apprenticeship, licensing and credentialing lead of veterans employment and training at the Department of Labor, told the audience about how DoL is expanding apprenticeships in critical areas and tying them in to the GI Bill, and brought to attention the new apprenticeship.gov website, an expanded resource. Nikki McDavid, chief of the Commercial Driver’s License Division at the Department of Transportation, discussed a safe-driving pilot program designed for under-21 drivers in interstate commerce, a possibility for National Guard and reserve members.

TFM Program Director Cassie Byrd and senior advisers said the initiative can “put policy to pavement” by bringing together operational experts and military life-cycle experts to connect generations, languages and capabilities. Sarah Amico, CEO of Jack Cooper Transit, called the industry “the tip of the spear” for the economy as a whole; “we feel every affliction on the body,” from bottlenecks to shortages. “How do we build resiliency into the system?” she asked.

One point brought up by multiple speakers was that the trucking industry can also be a good option for military spouses or partners; lots of jobs don’t involve actually driving trucks, and some can be done from home, making them portable during a PCS. Another was recruiting, especially the value of getting veteran recruiters talking to fellow veterans – or even while they’re still on active duty. As one speaker put it, “If you create pathways, you increase recruitment.”

A series of afternoon breakout sessions covered military-spouse employment, the latest in credentials and crediting, education quality, advanced aviation opportunities and more. One panel featured companies’ experiences with DoD’s SkillBridge, a program that gives servicemembers within six months of leaving the military the chance to develop additional skills to help them get civilian jobs – and how new companies can get on board. Gary Schaub, with the Office of the Undersecretary of Defense for Personnel & Readiness, said of SkillBridge that since the pilot came online in 2011, “we thought it was going to be a daisy – it’s turned into a huge sunflower.” An improved “SkillBridge 2.0” was introduced this year.

An old saying goes that “if [insert branch] had wanted you to have a family, they would have issued you one.” Multiple speakers at the Aug. 31 meeting were adamant about how much that has changed in 2022.

The summit continues on Thursday.