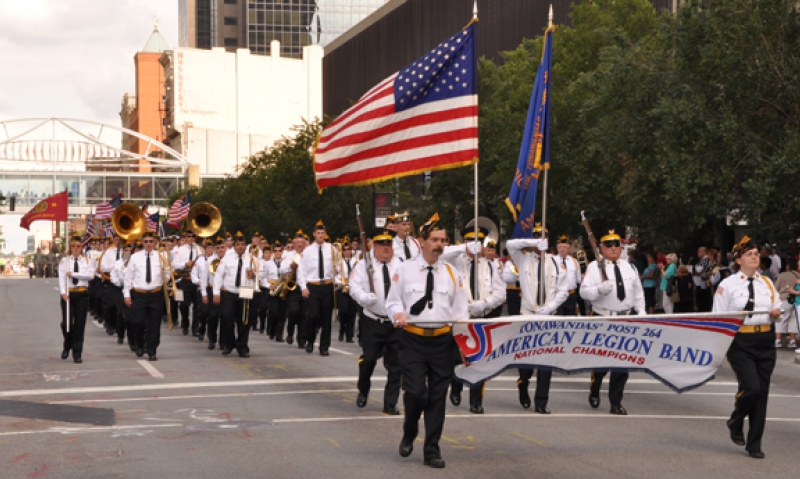 Ray Pasbrig, commander of Tanner-Paull Post 120 in West Allis, Wis., rode from his home state to Louisville, Ky., on his Harley-Davidson motorcycle – with his wife, Eileen, on back.

It was the couple’s first American Legion National Convention, and the opening parade – in which Ray and Eileen joined dozens of other American Legion Riders – made quite an impression on them.

“It was fantastic,” Ray said. “We were in that first group to come out and, to me, having so many similar people who rode anywhere from 50 miles to 1,200 miles to get here – and from all different walks of life – was just an amazing experience. I was really honored to be a part of this.”

Sunday’s parade, which marched down Main Street and lasted more than two hours, featured representatives from all 55 American Legion departments. You couldn’t have asked for better conditions. Temperatures hovered in the mid-70s and clouds occasionally dimmed the sun’s heat.

It was perfect for Department of Alaska Legionnaire Jimmie Foster, leading candidate for 2010-2011 national commander. He has been marching in convention parades “since at least 1986” and was really impressed with the local residents’ support.“We had a bunch of young kids out here, and we had people looking out windows and sitting on balconies, cheering us on,” Foster said. “It looked like we had a good turnout from the people of Louisville.”

Roger Smoot of Fargo, N.D., also has been to quite a few conventions – 45, in fact. The 83-year-old doesn’t hesitate when asked what the highlight of every convention is: “It’s the parades.”