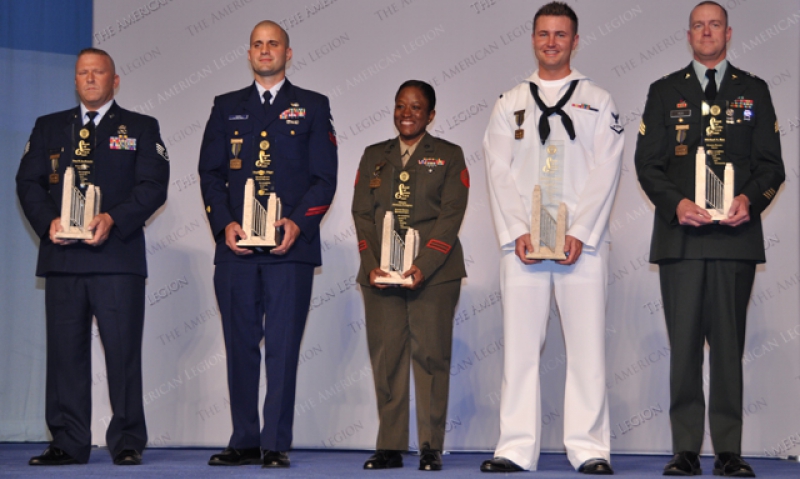 The American Legion recognized one member of each armed service for community service with its Spirit of Service Award in Louisville. Photo by James V. Carroll

Representatives from the five armed services were honored Aug. 25 by The American Legion at its 91st National Convention in Louisville, Ky.

“As an organization of wartime veterans, we understand and embrace the concept of service to community, state and nation,” Rehbein said. “These outstanding military members represent the very finest qualities of America – a steadfast commitment to serve their country and their fellow Americans.”

To receive this recognition, an individual must be an outstanding military professional, actively involved in community volunteer projects during off-duty hours.

“Volunteerism is at the heart of what The American Legion does ... and it is this dedication to service and community volunteerism that keeps the nation’s largest veterans organization growing,” Rehbein said.

“We know about service to others. We also know that those in uniform today, from all branches of military service – active duty, reserves and National Guard members – often go out of their way to make a difference in the lives of so many others in the communities in which they live. Today, The American Legion honors these outstanding Americans who reflect the great spirit of service to others that the founders of our organization considered essential.”

Rehbein said the individuals being honored fit the description and are representative of the finest fighting force in the world. “Each of them has demonstrated a strong commitment to serving others, a spirit of service that deserves the highest recognition The American Legion can provide.”