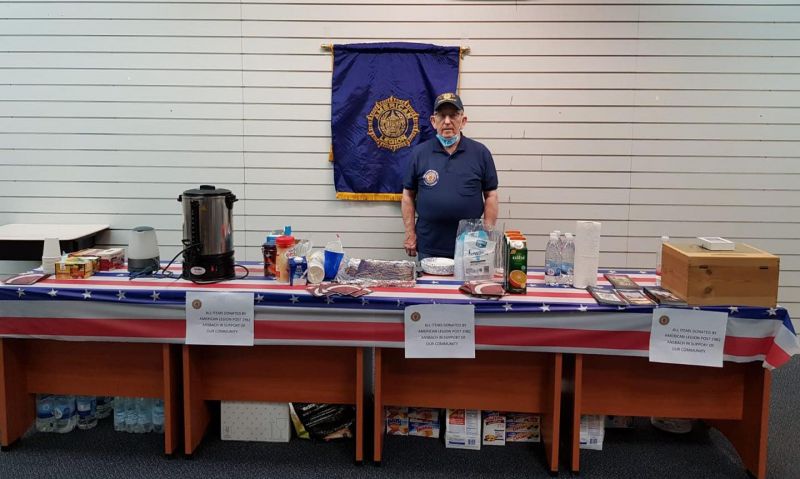 American Legion Family members of Post 1982 in Ansbach, Germany, have made it a practice to support the servicemembers and their families at nearby U.S. Army Garrison Ansbach. The post has provided Easter egg hunts for children at the base, supported its schools JROTC program, commemorated patriotic holidays and staged fishing events and barbecue dinners for the soldiers and their families, among other activities.

The post also supports its community, including providing a Christmas party for children at a local orphanage.

“I as post commander said we would be (honored),” Aungst said via email. “It is so important for us American Legion veterans to answer the call for help from our community to let them know that we care!”

On May 5 and 7, Post 1982 American Legion Family volunteers manned a table at the garrison vaccination effort, passing out coffee, tea, juice, water and snacks near the waiting room to those who had been vaccinated. Aungst estimated the post distributed nearly $600 worth of food and drinks to the nearly 1,200 military personnel, U.S. military ID cardholders and local national workforce members.

Aungst said Post 1982 has a lengthy relationship with USAG Ansbach, which includes a previous the post using as its facility a former child care center that was offered to the post by a previous garrison commander “because of what our post has done and continues to do in our community.”

And with future vaccination efforts planned by the Army base, Post 1982 plans to be there to continue to provide snacks.

“We will be at all vaccination events, helping our garrison (make) sure that our community members, military and their families, our civilian employees, be they American or local national, and our veterans stay safe,” Aungst said. “It's a worthy mission for The American Legion.”

As vaccination efforts continue across the nation, American Legion Family members have been there to assist with those efforts. The following are a few examples.

“Part of our mission at The American Legion is to support our veterans in any way that we can,” Post 5 Commander Ron Whitney told WIBW. “Hosting this vaccination clinic is just another way we can reach out to our veterans.”

·  The Broome County Health Department hosted a May 12 vaccine clinic at American Legion Post 974 in Whitney Point for the J&J vaccine.

·  The Allegany County Department of Health hosted a series of COVID-19 vaccination clinics in May, including one May 12 at Friendship American Legion Post 1168.

In Coudersport, the VA Finger Lakes Healthcare System administered vaccines to any veteran, their spouse and caregiver at the American Legion Potter Post 192.