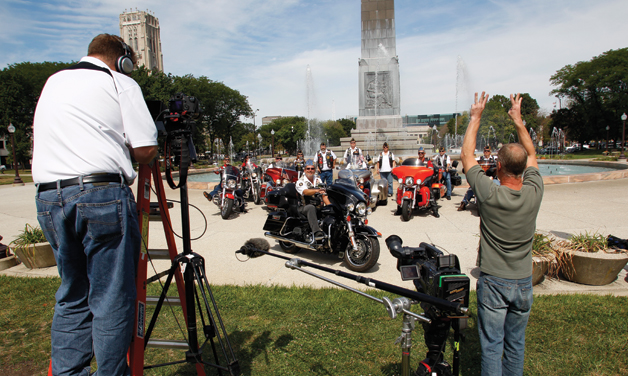 The American Legion Department of Indiana’s membership is on the upswing, thanks to its widespread presence on radio and television and at professional football and baseball games. The department recently launched an advertising campaign that brings the Legion’s message to the airwaves and packed sporting venues.

The campaign is the focus of the department’s five-year membership plan and the "project" of Department Commander Ed Trice during his tenure.

"The advertising campaign is not only about recruiting new members; it’s also about educating the public on who we are," Trice said. "If our community has a better outlook on who we are and what we do, then that makes it better for our organization as a whole."

But before the project could begin, leadership had to give its vote of confidence.

"The advertising campaign is a very exciting project, but it’s also a high-risk project that takes everybody’s involvement," said Hugh Dagley, Department of Indiana adjutant. "Leadership has to get behind it, finance has to have a way to pay for it and the elected officers have to have the vision and courage. There was not a single piece of this advertising campaign that wasn’t thought out before we put it in our five-year membership plan."

Future department commanders also bought in, agreeing to make it their project as well. "It took me 13 years to get here (as department commander), but in one year it’s gone," Trice said. "If you don’t have a plan for the next commander to carry on some of your projects, then you’re just spinning your wheels every 12 months."

The department first called WTHR Channel 13 — an Indianapolis news station. WTHR’s original sponsorship package was too expensive, but the station lowered the price considerably when Legion officials highlighted their outreach programs and services to veterans. From there, WTHR put the department in contact with the Indianapolis Colts marketing team, which also offered special pricing.

"Because we started developing relationships with WTHR and the Colts, they dropped their prices because they knew that whatever they were going to work with us on, the community would benefit from," said Bruce Drake, communications director for the department.

Since the Department of Indiana’s advertising campaign began July 1, numerous veterans have walked in to posts with their DD214’s; two female Legionnaire commercials were aired on the Queen Latifa (singer, actress) Show; more than 500 contact cards have been collected from membership booths at Colts games; and the department’s Facebook page has received 4,500 "Likes." Other departments have also reached out for help in starting similar campaigns.

Drake attributes much of the campaign’s success and Legionnaire support to the five-year membership plan.