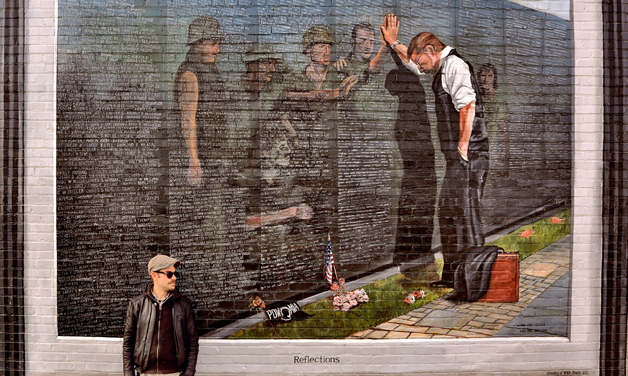 Ohio Artist Mike Sekletar stands in front of his 16-by-35 rendition of the Vietnam War painting, ‘Reflections.’ (Photo by Jason Shaffer)

The outside wall of a two-story brick building in downtown Amherst, Ohio, has turned from a blank canvas into a portrait of history. For the past two years, a 20-by-35 mural of the iconic photograph "Raising the Flag on Iwo Jima" has adorned one side of the building as "a thank you to all veterans," said local artist Mike Sekletar. Now, Sekletar has painted a 16-by-35 mural of artist Lee Teter’s 1988 painting, "Reflections," next to the Iwo Jima mural as a "tribute to the Vietnam era and the men who were involved in the war."

"I really wanted to paint the ‘Reflections’ image because it’s a brilliant piece of art," he said. "The image fuses two things that I’m passionate about – art and paying tribute to veterans."

Sekletar, a member of Sons of The American Legion Squadron 118 in Amherst, began painting the "Reflections" mural in June and dedicated it to his community this past Veterans Day during a ceremony that included Jim Williams, the man depicted in the painting mourning the loss of his fallen comrades. "I get goosebumps just looking at it (Sekletar’s mural)," Williams said. "He did a wonderful job."

Sekletar and his father John, a Vietnam War veteran and a member of American Legion Post 118, first met Williams in Cumberland, Md., during their visit with Vietnam Veterans of America Chapter 172 members. The chapter owns the rights to Teter’s famous image, and they granted Sekletar permission to paint a rendition of the image.

Sekletar brought the "Reflections" painting to life by putting a projection of the image on the brick wall, outlining the "sensitive points," shading in the figures and adding the names of the fallen, including 98 from the local county of Lorain. The mural’s first panel lists names taken verbatim from panel 29E of the Vietnam War Memorial in D.C. The bottom of the second panel lists the Lorain County fallen servicemen, and from there the names begin to fade.

"Looking at the painting itself and what it means, it’s saying that all these names are real people," Sekletar said. "And when you are actually writing the names of our fallen heroes, it’s heavy. I’ve had people come up to me and say they know three guys on the Wall or they went to school with them. That makes it even more real."

After painting the mural, Sekletar learned from Williams a few facts about the "Reflections" painting that many people do not know. For example, Williams said Teter initially asked him to wear his battle dress uniform when posing for the painting. However, since the painting was created more than 10 years after the Vietnam War, Williams told Teter that he no longer wore his battle dress uniform to work. Instead, he wore a three-piece suit.

"Jim having a suit on makes the painting more timeless," Sekletar said. "It makes it that more brilliant."

Teter wrote a letter to Sekletar upon the completion of the mural that said, "The work of (the) painting is finished, but the work of the painting, the effect, will bless many for years to come."

Sekletar’s future plan with the brick wall is to add murals that reflect wars with American involvement, including a Korean War mural next spring.

"I feel lucky that I’m able to do this; it makes me feel good," Sekletar said. "I’m proud of the two murals that I have done and the community has really embraced it.

"Painting and paying tribute to veterans is close to my heart and that’s why I’m doing it."

See more phots of the "Reflections" and "Raising the Flag on Iwo Jima" murals at http://amherstveteransmural.com/.