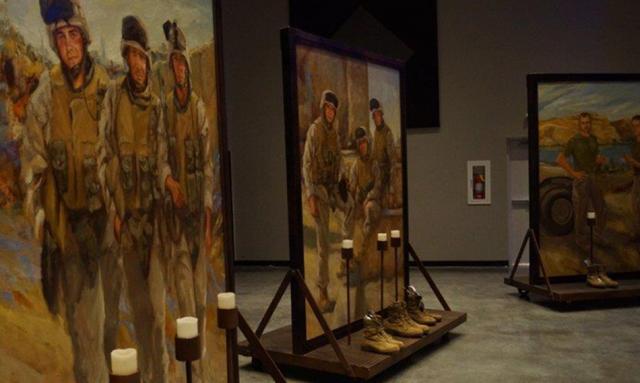 Initially, it was difficult for Cpl. Mike Strahle to stand near the life-sized portraits memorializing 23 men whom he served alongside in Iraq. Ohio-based Lima Company, 3rd Battalion, 25th Marine Regiment — once known as "Lucky Lima" — lost 22 Marines and a Navy corpsman in 2005 to IEDs and enemy fire. But after embracing the "powerful" Lima Company Eyes of Freedom memorial that Ohio artist Anita Miller created for the families of the fallen, Strahle is now exhibiting the memorial around the country, serving alongside his men again.

The vision to paint life-sized portraits of the fallen men came to Miller in a dream, and was unveiled on Memorial Day in 2008 at the Ohio Statehouse. The 23 Lima Company men are painted on eight canvases that stand 8.5 feet tall and 6 feet wide. Miller received photos of the men from their families, who Strahle said were distant from the project in the beginning but soon began visiting Miller in her studio, helping her stretch the canvases and sharing stories of their sons.

"When people see the exhibit, it’s sad and it’s going to make people angry," said Strahle, director of the Eyes of Freedom memorial. "But the main objective is for people to go through all the emotions during the exhibit and come out walking taller and more aware, more proud of what this country has done and what our service men and women have done to protect us. We want people to take away a sense of pride."

Since 2011, the Eyes of Freedom memorial has traveled throughout Ohio and to 14 other states, including Indiana. The American Legion Department of Indiana assisted Indiana Funeral Care in hosting the memorial at a community center in Greenwood, Ind., for three days.

"This memorial represents the Americans who have given their all to ensure our future," said Ken Cooper, Department of Indiana southern vice commander. "We were honored to recognize their loss but more importantly, this memorial helps ensure that we go forward recognizing that their sacrifice has given us the grace and freedom to move onwards."

Strahle said throughout his travels with the Eyes of Freedom memorial, American Legion departments and posts have been instrumental in helping their community partners host the exhibit. Additionally, Legion Riders oftentimes help escort the memorial into town, which travels in a freight truck generously provided by R+L Carriers, Inc., of Wilmington, Ohio. The truck, along with nearly 60 other R+L freight trucks, is wrapped with images of the paintings.

Strahle said the memorial can be set up in any indoor facility, such as a city hall or community center, as long as it has the capability to house the large paintings, which are meant to be arranged in an octagon. A set of each fallen warrior’s boots is placed beneath his image in the painting, along with an ever-living candle. Visitors can leave notes or mementos in the boots for Strahle to take back to the families.

"I have the best job ever - I’m still connected with my men," Strahle said. "When veterans from all war eras come to the exhibit, they are standing in front of my men, but they are not seeing my men. They are seeing the guys that they served with. It’s very healing, and it’s empowering."

To host the Lima Company Eyes of Freedom memorial in your community, visit: www.limacompanymemorial.org