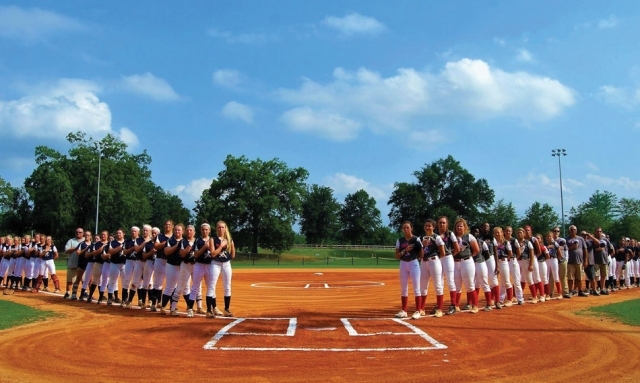 American Legion Baseball has been a premier summer sport for youth around the country for more than 90 years. Now, it is believed for the first time ever in the program’s history, a sanctioned American Legion Lady Fastpitch Softball League is a part of summer in the Department of North Carolina.

“This is monumental,” said Mike Hasson, a member of and coach for Post 21 in Morganton, N.C., who started the softball league. “I can tell you how proud and excited I feel to see this dream materialized into the program that it has. It’s because of the dedication and vision that a few of us had and believed.”

Hasson’s vision for an American Legion softball league started several years ago and made its trial season debut last summer with 200 players among 11 post-sponsored teams that included Post 21 and Post 82 in Shelby – home of the American Legion World Series. Prior to the Legion softball league, girls 14 and over in North Carolina didn’t have a summer league to play on other than travel softball.

“My thought for years was that girls needed a high-level outlet to play softball at this level opposite travel ball,” Hasson said. “This is a great way for girls to come together and play against some really good, competitive teams from other counties.”

The 2017 Legion softball season ran from late May to July with games played on weeknights to avoid conflict with travel ball. The state tournament was held in Morganton in late July, and Post 51 in Concord was crowned the state champion.

Post 82 Coach Richie Canipe said, “It was a lot more fun for (the girls) because games were at night, they played a real game of seven innings where travel ball you play by the clock, they liked playing under the lights and the pageantry of the Legion Baseball pledge. And the crowds we had were huge.” This year, a total of 31 girls will be playing for Post 82’s junior and senior softball league. “There was definitely a need for it.”

Hasson’s hope last year was to have a successful season and submit a resolution to the department to have the softball league fully sanctioned as an American Legion program. His success and vision was adopted – the resolution passed during the department’s 2017 fall conference.

“The reason we chose to pursue The American Legion as a sanction for our league was to offer softball players the same opportunity as baseball players to participate in one of the country’s most traditional, respected and honored institutions,” Hasson said.

“I’m sure they faced obstacles and hurdles when they created Legion Baseball nearly 100 years ago, but they persevered and never quit their dream. Because of them we have the same opportunity to build something that hopefully we will be writing about 100 years from now.”

On May 23, American Legion history was made when pitches were thrown for the opening games of the Department of North Carolina’s Legion Lady Fastpitch Softball League. This season there are 20 senior teams representing 18 counties and seven junior teams.

Hasson extends a heartfelt thank you to everyone who has supported him in this endeavor. This includes the players, coaches, parents and the Department of North Carolina. As well as Todd McNeely, Dusty Haynes, Hasson’s son, Wesley, and Canipe who were also instrumental in developing the softball program.

North Carolina’s Legion softball program has garnered attention from other states, which excites Hasson as he would love to see the program grow across The American Legion.

“The foundation that we lay here in North Carolina starting (this softball season) will be the foundation that this league will build upon here and hopefully throughout The American Legion across this nation.”

Hasson can be reached by email at  legionladyfastpitch@gmail.com.