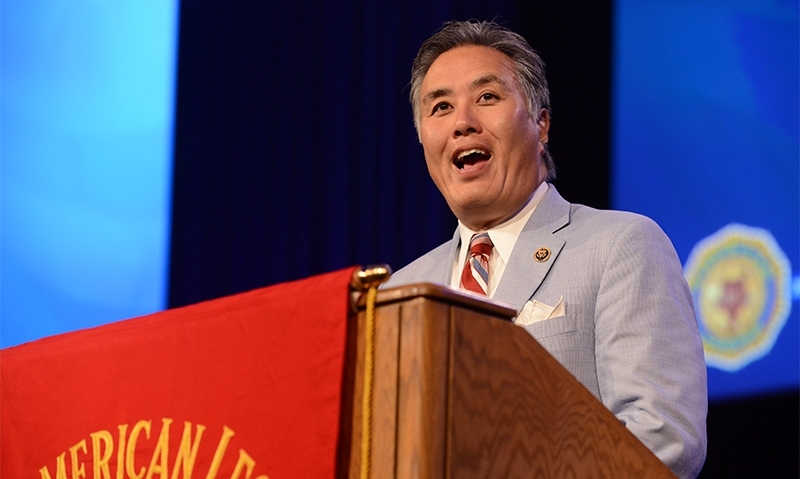 American Legion Boys State alum and U.S. Rep. Mark Takano, D-Calif., says he would not be in Congress today if his great uncle Mont had been denied the opportunity to fight to his death in World War II. The great uncle he never met was a member of the highly decorated 442nd Regimental Combat Team, a reluctantly authorized and segregated force of Japanese-American soldiers that sustained so many casualties it was known as the “Purple Heart Battalion.”

“Their motto was, ‘Go for Broke!’ because they were betting on America,” Takano told thousands of veterans and their families gathered Wednesday in Minneapolis for the 100th American Legion National Convention. “They bet that America could be a more perfect union … they were to become Americans, Americans by choice.

“I want you to imagine what it must have been like to see your family – your parents, your grandparents, your little brothers and sisters – incarcerated without due process and yet still believe in the promise of America.”

Takano’s grandparents and parents were held in an internment camp until their release, after which they restarted their lives in southern California. Growing up the descendent of Japanese-American World War II detainees, Takano strove in high school to understand the system of freedom and democracy that had so affected his family.

That aspect of Takano’s heritage has guided his career as an educator, politician and advocate for veterans and immigrants. He is a member of the House Committee on Veterans’ Affairs and serves on subcommittees for economic opportunity and health care.

In that role, he has fought for honorably discharged veterans who were later deported, including one, he explained to the crowd, who was convicted of a crime and served two years in a U.S. prison. After serving his sentence, the Mexican immigrant who received his green card before joining the Army, was deported because he had never become a naturalized citizen. “Sadly, there are many stories like Hector’s,” Takano said. “If anyone deserves a second chance in our country, it’s our veterans.”

Hector was later pardoned and became a naturalized citizen, and Takano attended the ceremony last year when the veteran became a legal American. Legal immigration, citizenship, naturalization and education in civics and democracy are all areas of deep interest to Takano whose responsibilities in Congress include oversight of VA health care and education.

He applauded The American Legion’s efforts in Washington to improve opportunities for both areas of VA, including efforts to protect student veterans from losing their GI Bill benefits to predatory for-profit education providers, fighting for passage of the Harry W. Colmery Veterans Educational Assistance Act of 2017 (the “Forever GI Bill”) and seeking protections for VA whistleblowers who expose breakdowns in VA health-care facilities.

Takano told Legionnaires and their families that he is making a priority of filling more than 30,000 vacancies in the VA health-care system nationwide and that he is deeply concerned about profiteering as VA ventures into new care-provision relationships from community providers. “As long as I am in Congress, I will not let VA become privatized,” he said, drawing applause from the crowd.

“VA is one of our nation’s largest institutions, and it has one of the most important missions. Efforts to undermine it have stagnated progress. A lack of qualified, experienced management and improper oversight have threatened the quality of health care veterans receive and have limited access to their earned benefits. To reverse course and put VA back on track, Congress should not only be prioritizing the proper implementation of reforms we have already passed but also must be looking ahead at building the future of VA to truly meet the needs of our veterans. Congress should be asking, ‘Is VA doing its job today?’ We must also be asking, ‘What can VA be 10 years from now?’ A forward-thinking approach would lay out a plan for high-priority issues that must be addressed over the next decade.”

Takano’s closing at the convention referenced the letter Sen. John McCain, R-Ariz., left for America before he died last Saturday. “This is what he said: ‘Do not despair of our present difficulties, but believe always in the promise and greatness of America.’ And I say to you that it is the promise of America that my great uncle Mont, who was killed in action five months before the end of World War II, is that promise he bet on. This promise is why the battle cry of the 442nd – 'Go for broke!' – is so relevant today. When I tell people his story, I ask them if they think my great uncle won his bet on America, and I present myself as evidence that he did. I am proof that his sacrifice, that his bet, was worth it, because I am able to stand before you, as a Congressman, the greatest honor of my life. Today, let’s all pledge to continue believing that this country is still the best bet for the promises of freedom, equality and opportunity for all.”