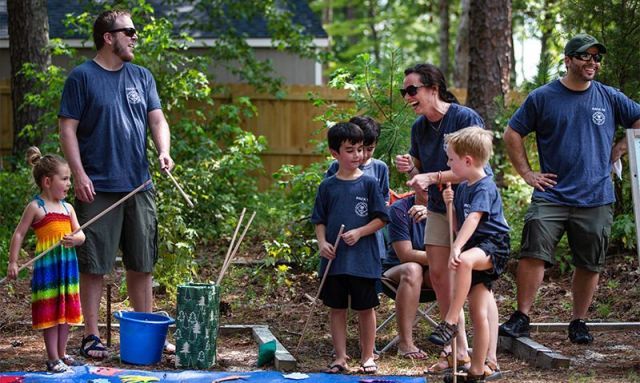 The American Legion’s National Executive Committee passed Resolution 20 during Spring Meetings in May. The resolution calls for American Legion posts to “promote a fun, positive public image and attract a new generation of American  Legion Family members through the planning and operation of Family Play Day or Game Night events in their communities.”

At Post 365, kids raced tricycles and dodged water balloons, adults played cornhole, and there was karaoke, face painting and the decoration of cookies. At Post 116, kids tossed rings onto a peg board, Boy Scouts played basketball, police officers played cornhole, firefighters showed kids inside two fire engines, and there was an opportunity to douse Post 116’s immediate past commander, 34-year-old Derric Grimes, an Army combat veteran and father of two young girls, into a dunk tank.

By connecting all generations, Grimes said, “They see it now as what The American Legion ought to be – a place that is there for the family, is there for the community, but is also a place for veterans, to be together, spend time together and build that camaraderie. It’s not that any one part of The American Legion’s mission is more important than another. We have to care for veterans. We have to support their families. And we have to strengthen our communities. It’s not an either or, it’s an and.”

For Post 365 Commander Steve Miller, “We’re trying to do anything we can do enhance the family orientation so anytime that we have the opportunity to get kids in here and young families, that’s a win-win. I want the young families to come in — kids, grandkids — this is a family atmosphere. It’s an opportunity to bring the Legion and families together.”

Robyn Nolin brought her 11- and 8-year-old sons to the Post 365 event. “It’s family — Legion Family — it’s what we do,” said Nolin, an Army veteran and commander of Post 364 in Santee, Calif. “Most of us veterans have families, especially post-9/11, and as a recruiting mechanism we have to do better at doing family involvement at posts.”

Community outreach is familiar territory for Post 116, which has grown by about 700 members over the last decade, to an all-time high of 918.

Legion Family Day “gives the community a sense that we are doing something here, that we are a place where folks can congregate and have a good time with their kids,” explains Post 116 Americanism Children & Youth Chairman and Scout leader Scott Quilty, an Army combat veteran who lost an arm and leg to a roadside bomb in Iraq in 2006.

Post 365 member Chris Yates, who served 20 years in the Marine Corps, sees the Legion Family Days continuing as an extension of the outreach that is already a priority for the post.

“At the end of the day, the mission is introducing the community to The American Legion, getting some of the active duty that’s in the area to know that we’re here, to know that we’re a family-oriented organization ...,” he said. “The issue is, can we do more for families? Can we bring more families in? Can we focus on the family so that we’re not separated again? We’ve had enough separation from our families. If we come to the post and have a family fun day, we just enhance life. We enhance who we are and who we love, and we’re doing what we do together.”