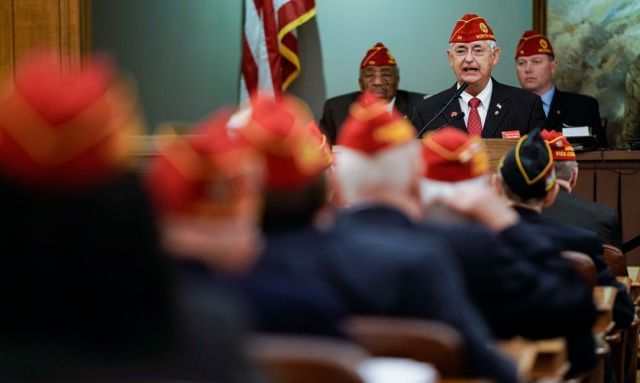 The American Legion National Executive Committee (NEC) passed 19 resolutions during Fall Meetings in October. Two resolutions to make note of include changes to the Preamble and National Oratorical Contest.

Resolution 1
With the signing of the LEGION Act – Let Everyone Get Involved in Opportunities for National Service Act – into law July 30 by President Trump, the U.S. government now acknowledges that the military has been involved in at least 12 additional military conflicts not previously recognized. As a result of this, The American Legion National Executive Committee adopted to amend the organization’s Preamble to recognize the millions of U.S. military veterans from all of these wars and conflicts that have occurred since World War I and II.

Resolution 1 was adopted by the NEC Oct. 16 during Fall Meetings in Indianapolis, which amends “the Great Wars” in the Preamble to “all wars.”

The Preamble to the Constitution of The American Legion now reads:
For God and Country, we associate ourselves together for the following purposes:
To uphold and defend the Constitution of the United States of America;
To maintain law and order;
To foster and perpetuate a one hundred percent Americanism;
To preserve the memories and incidents of our associations in all wars;
To inculcate a sense of individual obligation to the community, state and nation;
To combat the autocracy of both the classes and the masses;
To make right the master of might;
To promote peace and goodwill on earth;
To safeguard and transmit to posterity the principles of justice, freedom and democracy;
To consecrate and sanctify our comradeship by our devotion to mutual helpfulness.

Resolution 2
As American Legion posts begin to conduct the Oratorical Contest, they can now promote that scholarships awarded at the National Oratorical Contest have increased after remaining the same for the past 22 years.

Scholarships awarded starting with the 2020 American Legion National Oratorical Contest in Indianapolis are as follows: