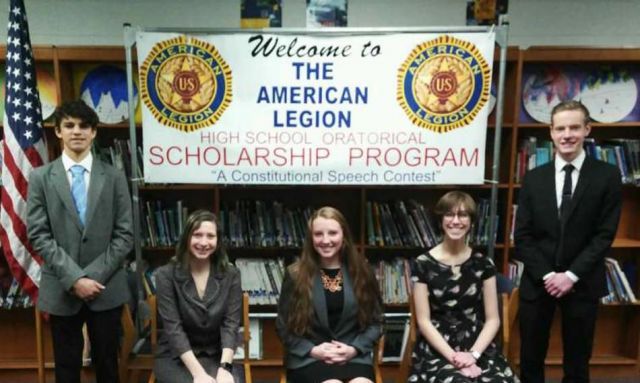 The American Legion has recognized February as Americanism Month since 1960 with Resolution No. 163. It is our responsibility to foster Americanism among today’s youth, which we can fulfill through our programs such as Boys and Girls State, Legion Baseball, flag education and Oratorical Contest.

Members of the Harry K. Kunzie American Legion Post 98 in Big Rapids, Mich., is a great example of fostering Americanism.

Six years ago, the post resurrected its American Legion Boys State and Auxiliary Girls State program after not sponsoring a participant to either one for 20 years. Now, 127 rising high school seniors have been sent to both Department of Michigan programs; and the post has recruited 12 new members as a result. And in January, Post 98 conducted its first Oratorical Contest with five students from Big Rapids High School.

“I think our future hinges on our ability to reach out to the community, to get into the schools and be the face of The American Legion,” said Mark Brejcha, District 10’s Boys and Girls State recruiter and former adjutant of Post 98.

After a 30-year career in the U.S. Air Force, Brejcha is now a sixth grade social studies teacher at Big Rapids Middle School. When Post 98 was resurrecting its Boys and Girls State program, Brejcha asked the school superintendent to speak with members of the social studies team to help identify participants. The conversation revealed that the superintendent was a Boys State alum, and six other educators at Big Rapids High School also attended a Boys or Girls State program. “Now we have credibility because the teacher that stands before these young men and women attended our program.”

Thanks to the relationship with the social studies team, they also provided a list of Oratorical participant names.

With student names in hand, Brejcha followed the same steps he takes with Boys and Girls State – he sent letters directly to the parents of the students. These letters share congratulatory remarks that their son or daughter has been nominated to participate in Post 98’s program; it lists Brejcha’s contact information; provides a link to national’s web page about the programs; and mentions that Brejcha will be following up.

Fundraise. With about 112 members, Post 98 is relatively small but still sponsors delegates to Michigan Boys and Girls State. In 2019, they sent 32 young men and women.

Find your Grant. Brejcha referenced reading the book “Lincoln on Leadership” where President Abraham Lincoln went through several generals before he found his one – Gen. Ulysses S. Grant. So within the post, find your "Grant" who is motivated to take on the program to ensure its success. And the post commander has to promote. “The commander’s role is to go out and bridge the community and make them aware of what we’re doing,” Yontz said.

Get into the schools. Brejcha emphasized that your first contact should be with social studies teachers – not guidance counselors – because they spend their days with the students and can validate their leadership, character and civics interest to make a qualified candidate for your youth programs. He stressed to always talk about Boys State and Auxiliary Girls State – be a recruiter, and sell the value, for both programs.

Go right to the parents. When students receive a piece of paper touting an American Legion youth program, it may get thrown away or never reach their parents because the students oftentimes “don’t see the value in it (the program). But parents do, as well as the opportunity it provides,” stressed Brejcha.
So when you receive your list of potential students for your programs, send a letter directly to the parents stating their child has been nominated and share details about the program.