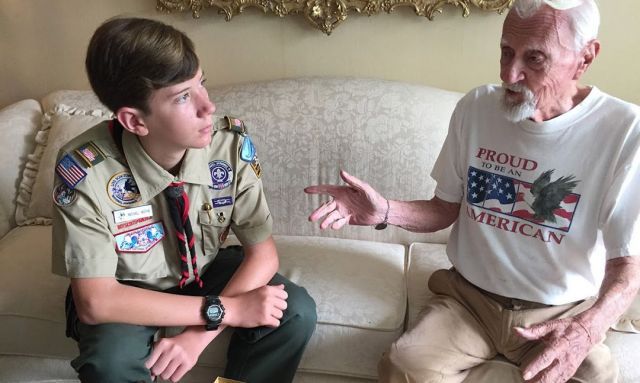 The American Legion’s Eagle Scout of the Year for 2020 was awarded to Michael McPhie of Irvine, Calif. As a recipient of the award, he is receiving a $10,000 college scholarship.

McPhie was nominated for the award by the Department of California and is a 15-year-old sophomore at University High School with a 4.0 GPA. He has been active in Scouting since 2011 with Unit 749, and earned his Eagle Scout rank in March 2018.

McPhie’s Eagle Scout project honored veterans in Orange County by collecting their military and war experiences through oral interviews for the Veterans History Project at the Library of Congress in Washington, D.C. The archived interviews will allow “current and future generations of Americans to hear directly from these veterans about their war experiences,” McPhie wrote in his Eagle Scout of the Year application.

McPhie identified veterans of all wars to interview by asking family and friends, and by contacting several veterans service organization, including local American Legion posts. Over the course of two days in 2017, McPhie conducted interviews with veterans at American Family Housing’s Potter’s Lane (which provides permanent supporting housing for chronically homeless military veterans) and Newport Beach Civic Center. The interviews “were truly an opportunity to thank our local veterans and listen to their stories and learn from their experiences, examples and wisdom. They were an opportunity for us to celebrate patriotism and Americanism and duty,” McPhie wrote.

Share stories
The American Legion Media & Communication’s Division is developing World War II remembrance articles for nationwide distribution and will devote a significant portion of the September 2020 American Legion Magazine to those who fought to victory 75 years ago.

“Our WWII Story” is a media kit (available at www.centennial.legion.org/resources) to provide ideas for local posts to collect, curate and share their stories from that historic period. Tips for capturing the firsthand remembrances of Legionnaires who were in the war are included among ideas to curate such World War II-related history as post namesakes, area memorials and homefront activities.

Legion posts are welcome to submit their stories in the “My WWII Story” section of  legion.org/legiontown. And can add their post histories on the national Legacy & Vision website at  legion.org/centennial.