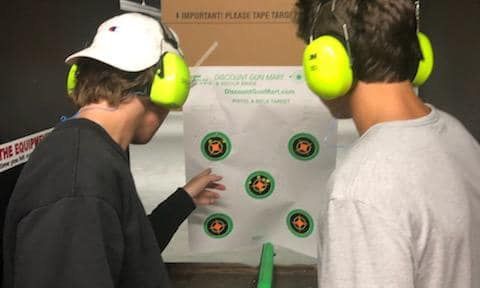 More than 4,300 people have registered and completed, or are in the process of completing, American Legion National Commander James W. “Bill” Oxford’s 100 Miles for Hope challenge. Thank you to those who have registered. It has been great to see the ways everyone is exercising for the challenge, as well as the astounding financial support provided to its beneficiary – The American Legion Veterans and Children Foundation.

Michael Hall and Keegan Leonard have hopes of attending a military service academy following graduation in 2021 from La Jolla High School in San Diego. The two young men have been running together three to four times a week in the evening as a way to prepare of the candidate fitness assessment. So when Michael saw the 100 Miles for Hope challenge set forth by Oxford, he knew there were two opportunities at hand – run 100 miles for the military assessment and raise money for California American Legion District 22’s new Junior Shooting Sports Program, of which, the young men are participants.

“We saw the 100 Miles challenge and thought it was a perfect way to raise money for the shooting program, which needed funding, and just to continue to do what we do with running,” said Michael, an Eagle Scout, Oratorical Contest participant and California Boy State delegate for 2020, which was canceled due to the pandemic. Michael and Keegan wrote a letter about their fundraising challenge and sent it to family members, Legionnaires and others.

With less than 25 miles to go in the challenge, they have raised $1,300 – enough for the purchase of two air rifles.
“Both Michael and Keegan are aspiring for a career in the military and this is why the (new American Legion’s) rifle program means something to them,” said Francis Hall, Michael’s father and a member of Larry Holmberg American Legion Post 731 in Linda Vista, Calif. The air rifle program, which is housed within Post 731 but involves all of District 22, just got underway this past spring after being dormant for years.

“We are in the growing stages of this program, and what I think is amazing is in the last six months since we actually started our very first shoot is how fast it’s growing and taking off,” said Chuck Camarato, District 22 commander and a range instructor at Post 731 for the youth marksmen.

Thirteen youth representing four American Legion posts in District 22 participate in the air rifle program. “We decided to sponsor it as a District 22 program out of San Diego so we can afford the opportunity to other posts who want a (air rifle) program but don’t have the funds,” Camarato said.

Francis added that “everyone’s biggest hurdle is not going to be the desire to start a program, it’s going to be getting the funding to start a program. That’s why I think the 100 mile challenge, support of the Auxiliary who gave us $1,000, and the support from the post (731) just to get it going is the biggest component in the success.”

The 100 Miles for Hope challenge ends Nov. 11, Veterans Day. If you didn’t register, we will continue this effort moving forward so stay tuned. And when you do sign up for the next challenge, remember to look for ways to use it like District 22 did to support post, district or department level programs.