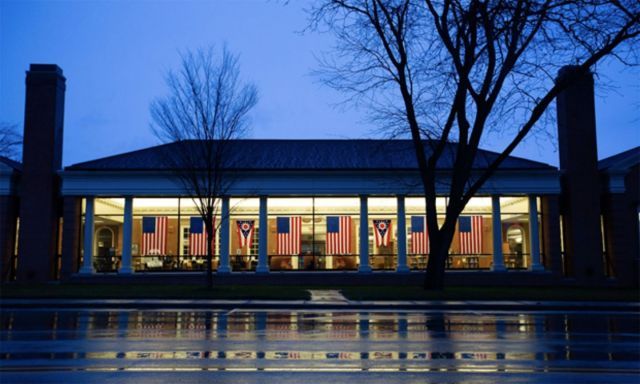 Please share your flag moment with photos at www.legiontown.org under the category “Rally Around the Flag.” Or share on your social media channels and use the hashtag #rallyaroundtheflag. Read submissions from people about their flag moment at  www.legion.org/flag. The following is one from an American Legion post in Ohio.

When the Way Public Library in Perrysburg, Ohio, was closed in July 2020 due to COVID-19, the library’s Foundation Administrator Lisa Richard wanted to display the U.S. flag in the windows as a unified symbol that Americans were in this together. Richard reached out to the local American Legion Post 28 on how to properly display the flag.

“As all of us are in the war against this virus, why not rally around that great symbol, the flag?” wrote Joseph Stockner, adjutant of American Legion Post 28 in Perrysburg, on Legiontown. Post 28 donated six American flags and an Ohio one that Richard hung in the Way Public Library front windows.

The U.S. flags served as “a constant reminder that we are all in this together,” Stockner said.