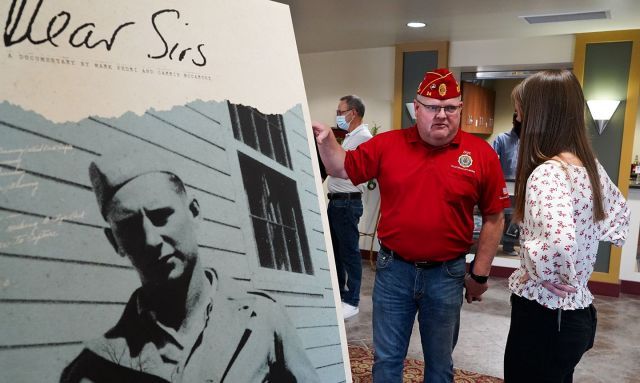 Ten years after his grandfather’s passing, Mark Pedri began to discover a man he had never known. A native of Rock Springs, Wyo., and member of Sons of The American Legion Squadron 24, Mark uses film to chronicle what it took to finally and truly know his late grandfather - a World War II POW.

Mark spent most of his formative years alongside Silvio Pedri, who passed down to his grandson a love of the accordion. He never, however, spoke of his military service.

“We knew he was in the war,” Mark explains. “We knew he was a prisoner of war, but anything other than that was just uncharted territory. So, when I found that out, it was like meeting the most impactful person in my life, for the first time because it was a side of him that I never really had the opportunity to meet.”

Through the discovery of photos, letters and documents, Mark learned of his grandfather’s ordeal in the war.

Mark and his wife Carrie McCarthy had been working on documentary films for years, but they were always telling other people’s stories. This project would be different.

“We both decided that this is our story,” he says. “We need to take the initiative and tell it. So, we both left our day jobs, and that’s when we decided to put together the pieces, to bike across Germany, to tell Silvio’s story.” By bicycle, they retraced Silvio’s steps through Germany to produce the film, “Dear Sirs.”

Mark’s goal is to connect with other American Legion posts around the country and make “Dear Sirs” a community event where members of the American Legion Family and the public can see and appreciate the story of a man who came home from World War II and, like so many others, didn’t talk much about it.

Posts that are interested in learning more or screening the film can learn more at  dearsirsfilm.com. A trailer for the film is posted on YouTube at  youtu.be/Cui3PnUmDcI.