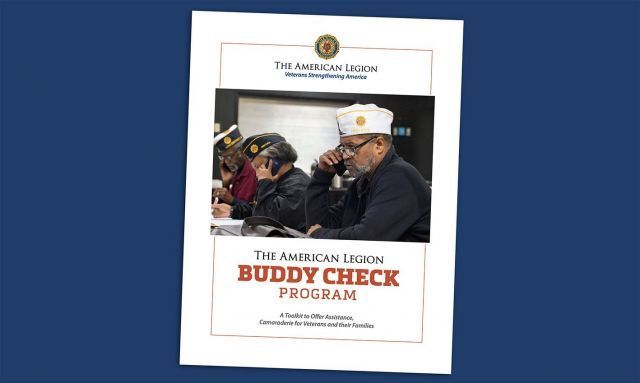 As of June 1, Puerto Rico stands at 104.97% membership with over 3,100 members and a 98% renewal rate. They are the first department to qualify for American Legion National Commander Paul E. Dillard’s incentive of retaining at least a 90% renewal rate and hitting 103% of their membership goal. As a result, now through Oct. 1, Puerto Rico receives a credit of $18.50 for each member submitted above the 103% goal.

Puerto Rico is a small department, but their reason for membership success can be used by departments of any size: Buddy Checks.

Starting in January, department leadership made calls weekly to members in the headquarters post and to non-renewals.

Department Commander Antonio Arroyo made over 600 Buddy Checks. “When you do a Buddy Check, the way you talk to the people, that is the most important thing,” Arroyo said. “Show that you are worried about them, see how they feel, ask how their family is. That makes the difference. Always, always, I talked to them like I was talking to my mother, my father.

“Some members told me, ‘Wow. This is the very first time that somebody has ever called me from the Legion.’ I called them from my personal phone. I told them to feel free to call me anytime that they had any problem. They responded.”

One Buddy Check call to a member in the headquarters post resulted in Arroyo driving to the Legionnaire to personally deliver his membership card.

The Department of Puerto Rico reached 103% membership by Spring Meetings last month. During the Buddy Checks, if the veteran was not in need or there were no concerns, a reminder about keeping their continuous years membership active was addressed. Benefits to being a Legionnaire also were discussed with the National Emergency Fund (NEF) being a big one for Puerto Rico.

Between Hurricane Maria in 2017 and the earthquake in 2019, nearly $39,000 was provided in NEF grants to 40 Legionnaires in the department.

“Your membership works for you, and I’ll tell you why. You tell them the benefits of it then they see the value in their membership,” said Department of Puerto Rico Adjutant Juan A. Cruz-Rodriguez. “It works (for membership success).

“We do a lot. But we ask from our members a lot too. We ask for membership dues, we send them letters for donations and sometimes they feel like ‘I’m giving, I’m giving. What am I getting back?’ You need to remind them the potential that their membership has.”

Arroyo added that members “have to know where their membership dues go and what we do. A lot of times we don’t tell them what we use the money for or why. They need to know.”

The department commander also called every post commander monthly to remind them to make Buddy Checks and “expressed to them that they need to talk to their Legionnaires like they were talking to their mother or their father.”

“Show that you are concerned about the well-being of the member,” Cruz-Rodriguez said. You can say, “‘I’m calling because I want to know how you are doing. You are important to me.’ Buddy Checks do work. It’s just how you do it. Show genuine kindness and concern so they can feel it on the other side.”