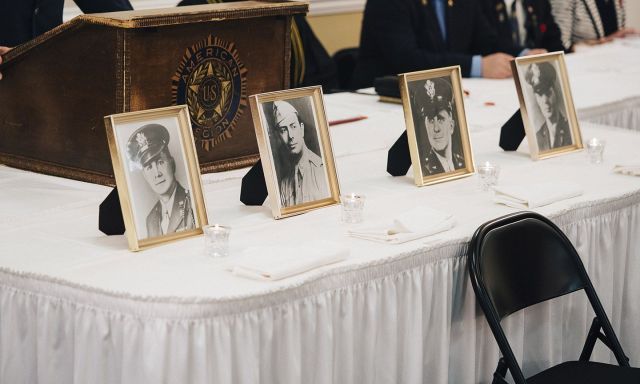 On Feb. 3, 1943, the United States Army Transport Dorchester tragically sunk while crossing the North Atlantic, transporting troops to an American base in Greenland. A German U-boat fired a torpedo that struck the Dorchester, killing 672 of the 902 officers and enlisted men, merchant seamen and civilian workers aboard. Many of those survivors owe their lives to the courage and leadership exhibited by four chaplains of different faiths, who, in sacrificing their lives, created a unique legacy of brotherhood.

The following is an example of how to conduct a Four Chaplain’s service. Additional information is available in our Four Chaplains Sunday guide.

Program: Printed programs add to the dignity and importance of the occasion.

To symbolize the tragic sinking of the Dorchester, there can be any number of focal points for the service such as four lifejackets or four empty seats.