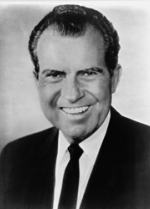 For his military and elective service to his country, Nixon marked his first year in the White House by receiving The American Legion's Distinguished Service Medal in 1969.

The National Executive Committee said the president "has served our nation with dignity, honor and courage, in both military and civilian life, and in both the legislative and executive branches of government."

Nixon, a Quaker, was further lauded because "he entered the U.S. Navy voluntarily during World War II, although he could have remained out of military service on religious grounds." He served from 1942 to 1946, including 15 months in the South Pacific.

Nixon inherited the Vietnam War upon taking office in 1969. After an initial escalation in Vietnam and neighboring countries, U.S. troops were gradually withdrawn, and he reached a cease-fire with North Vietnam in 1973, at the start of his second term. He established diplomatic relations with China, following his visit in 1972.

Although re-elected by a landslide in 1972, public opinion declined as the Watergate scandal unfolded. The break-in at the Democratic National Committee's headquarters, and the resulting cover-up, led Nixon in 1974 to become the first president to resign.

A native Californian, Nixon's earlier political career included service in the U.S. House from 1947 to 1950 and the Senate from 1950 to 1953. He served as vice president to Dwight Eisenhower for two terms. Nixon was narrowly defeated in the 1960 presidential race by John Kennedy, but made a comeback eight years later to claim the White House.

After his resignation, Nixon evolved into an elder statesman and author. He died in New York in 1994, at 81.