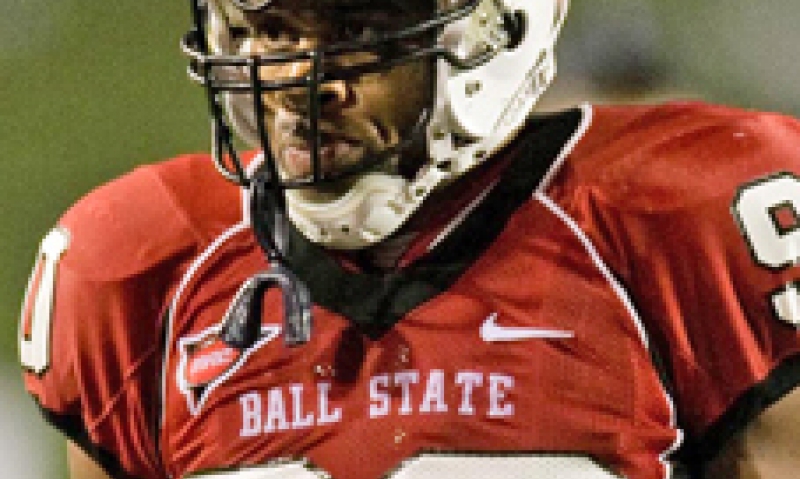 This article originally ran in the December, 2008 issue of The American Legion Magazine.

The tale of defensive end Brandon Crawford isn't that of a typical college football player. For starters, Crawford is as old or older than some of his coaches at Ball State University. He graduated from Fort Wayne, Ind., South Side H.S. in 1996 but decided to join the U.S. Marine Corps in 1999. He served until 2003.

Taking advantage of his GI Bill benefits, Crawford enrolled at Ball State in Muncie, Ind., and in 2006 he walked on to the football team. The Cardinals were 5-7 his freshman year and soon improved to 7-6 in 2007, earning a berth in the International Bowl. Crawford was a big part of that success.

But Crawford's sophomore year was just the beginning. In 2008, the Cardinals have soared to a 12-0 record, are ranked 15th in the Bowl Championship Series and are on track to go to their second-straight postseason bowl. Crawford has 28 tackles for loss and three quarterback sacks.

The American Legion Magazine: Why did you decide to join the Marines in 1999?

Brandon Crawford: I've always had family in the Marine Corps, and it was something I wanted to do to give back to my country. It was in the back of my mind at the time, and something I just talked to my family about. I went ahead and did it.

Q: How did the military influence your approach to college football, education and life in general?

A: Discipline, first and foremost - just being on task, taking care of things you need to take care of inside the classroom, staying focused, being accountable. I would say being unselfish is one of the major things, especially on the football field. You have to be an open-minded person, an open-hearted person. You have to be willing to explain knowledge and give knowledge. Don't keep it just because you know it. Be willing to help your teammate. Be willing to give him some information that might help him out on the football field. And leadership traits. Making the right decision out on the football field. Being dependable. The mental toughness that's required when you're going through those summer conditioning workouts when everyone would rather be at home sitting on the couch. You're out there pushing each other as brothers.

Q: How important was the GI Bill to you?

A: It allowed me to have the funds available for living expenses, rent, things of that nature. Not being on scholarship, it allowed me to be here. It was a great program. If that was not in place, I wouldn't have been able to walk on at Ball State.

Q: You're 10 to 14 years older than most of your teammates, and you might be as old or older than some of your coaches. How do they treat you?

A: Old man. Craw-father. Craw-daddy. Coach (Brady) Hoke started the craw-daddy thing. Everyone added their own things onto it. One coach I might be older than. The rest of them are right at my age.

Q:Likewise, you're probably older than 70 to 75 percent of the students on campus. Is that difficult?

A: Everyone understands - I think I understand more than anyone - that everyone takes a different path to get where they need to go. It's college. The traditional age might be this or that, but at the same time, you can come back if you're able. A lot of times they're like, "Are you sure you're as old as you say you are? You sure don't act it." I feel like I'm just one of the guys.

Q: You blocked a potentially game-winning field goal a year ago, and your team ended up winning in overtime. That went a long way toward getting you guys in a bowl. It just so happened that the block came against Navy. Cool, or bittersweet?

A: I would say both. For the team, it was a great victory, but bittersweet, because it's your countrymen. You served with them, your brothers-in-arms. I was doing my job, and I'm pretty sure they understand that, coming from a military background. Whenever you get out there, in whatever you're doing, you want to get the mission accomplished.

A: It seems like it's a dream, but at the same time I try to stay focused on the task at hand and what we have to do. But it does seem like a dream. Our coaches always tell us that if we apply ourselves and give everything we have on the field, success is possible. They always preach that to us: get out there, be competitive and don't shortchange yourself. We're more trying to prove to everyone that we can play with anyone, that we are competitive, and that we're not just some small school in Indiana.

A: The sky's the limit for me. I plan on playing again, but I'm not going to limit myself. If I did limit myself, I wouldn't be playing right now. I wouldn't be here. If the potential is there for me to play beyond college football in the (NFL), then I'll pursue that. Right now, I'm just going to take it one day at a time.