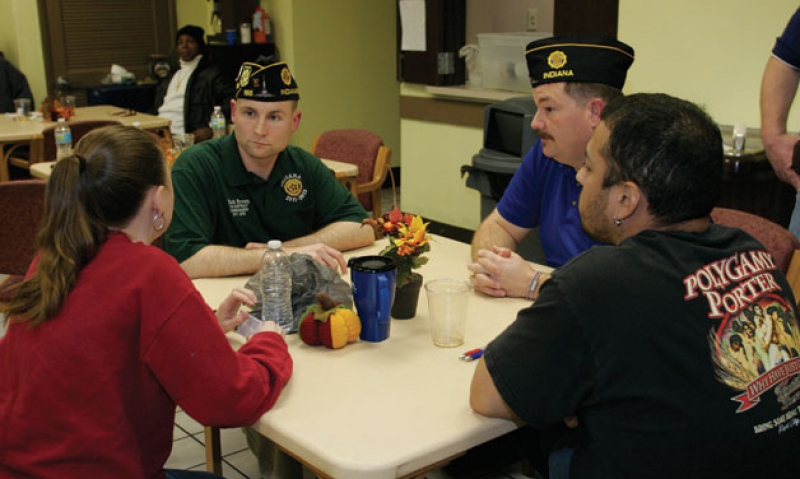 Legionnaires from University Veterans Post 360 meet at the Hoosier Veterans Assistance Foundation for a pitch-in dinner and fundraiser for local homeless vets. (Photo by Tom Strattman)

With drawdowns overseas commencing, troops are coming home in large numbers and heading to college campuses around the nation. When the newest influx of veterans heads to Indiana University-Purdue University Indianapolis (IUPUI), they’ll have a crucial support system waiting the for them in University Post 360 – an on-campus Legion post.

To charter members, it was a natural fit: veterans on their campus needed to stick together. It was crucial that they establish a support system of student veterans helping student veterans, with things like the VA system or the multitude of challenges that come with being freshly separated. Not to mention, the stresses of being the lone veteran in a sea of students who generally don’t have any military experience.

"It’s not easy for a student vet," Post 360 Commander Kevin Mezger said. "They have different scenarios going on in their lives. They are trying to acclimate back to a civilian sector area, plus handle school, plus handle other issues that the normal person doesn’t experience on a normal basis."

The post currently has around 40 members, all of whom help each other out with things like filing benefits claims, entering the VA system or even just basic help with homework.

"Our commander, Kevin, helped me get into the VA system," said Juan Trejo, a recent graduate of IUPUI and Post 360 member. "I just kept putting it off and he kept telling me I had to do it. Finally he came over, took a whole half day off, and explained it. We went over to the VA and we got me hooked up."

Post 360 was founded a little over a year ago, when membership representatives from the Department of Indiana reached out to veterans on the school’s campus. Rich Brown, from the department’s 11th district, gave a presentation to veterans at IUPUI. Kim Mezger, wife of Kevin Mezger and an Air Force veteran, was in attendance.

She found the presentation intriguing, and she already had a good core group of veterans in her pier group at the school whom she knew through an honor society for IUPUI veterans. She thought a Legion post on campus would be a good fit for IUPUI because of its commuter nature and the large number of veterans who attend. So she started talking with the Department of Indiana about founding a post.

"I think basically the idea (of the presentation) was, why ask all these people to become members when we’ve got a big group of them? Why not ask them to start a post?" said Clinton Holsinger, a charter member of the post and recent graduate.

In November of last year, the post chartered with 16 members. Since then, they’ve more than doubled their membership base through emails to veterans listservs and general word of mouth. Three professors and other faculty have joined, along with graduates of the school and post-graduate students.

Charter member Aaron Shaw has found a great deal of sanctuary in joining the post. As a PhD student with a military background, Shaw is an outlier among his academic contemporaries.

"It’s nice to have people around who are the same age," Shaw said. "I hang out with some of the people in my class, but I’m a good 10 or 15 years older than some of them. Most of them are career academics. They’ve gone into high school, to college, then applied straight to the PhD program when they were maybe in their early 20s."

Perhaps most crucially, Post 360 also provides a support a system for veterans who are coming into the school as undergraduate students. Member Jose Sandoval said this can be a jarring experience for veterans in their mid- to late-20s who are used to a structured military life. It can be particularly trying to be surrounded by younger, high school-aged students who have problems and opinions that can seem trivial compared to the stresses of war.

"I’ve come back from war, and I’ve come home and gone to school, and I’ve had to listen to the younger students talk about things they didn’t fully understand like the war and use their parents’ points of view on things," Sandoval said. "So when soldiers start to come back and they’re having to go through that on the first time on their own, they can come talk to us about it."

Sandoval says learning to accept the viewpoints of civilian students who are much younger and less experienced in life is a matter of growing older and gaining perspective. This is a lesson he can impart on younger members of the post.

"I have to be mature on my part to accept that (other students) are going to have those views and not get mad at them," he said. "When I was young, I was just real quick to anger because I thought it was like a personal jab at me. As I grow up, I realize it’s not."

In the future, the post is interested in attracting members from other schools in the state and also veterans in the community who don’t attend IUPUI but who are interested in supporting student veterans who need help juggling academics, the VA system, possibly a family life and the general challenges associated with separating from the military. "It can be as simple as going out and having a cup of coffee with someone who needs help with their homework," Kevin Mezger said.

Mezger knows the struggles of entering academia from the military firsthand. He enrolled at a nearby university when he left the Air Force in the ‘90s. The college environment wasn’t a good fit for him post-service, and he ended up leaving the school after his first semester, later finishing at a different college.

As someone who has no affiliation with IUPUI as a student or faculty member, he’s joined the post because he can knows the importance of making sure that student veterans finish their education once they’re enrolled.

"It’s imperative we make sure that they don’t drop out," he said. "They’ve already voiced their desire to advance themselves... A lot of veterans today are signing up for a service commitment with the idea of going to school afterword and bettering themselves. We shouldn’t fail them in that.

"We provide them a GI Bill, but we shouldn’t stop there. Some of these students need some additional help. We need to make sure that happens, and we are there to try and provide that."