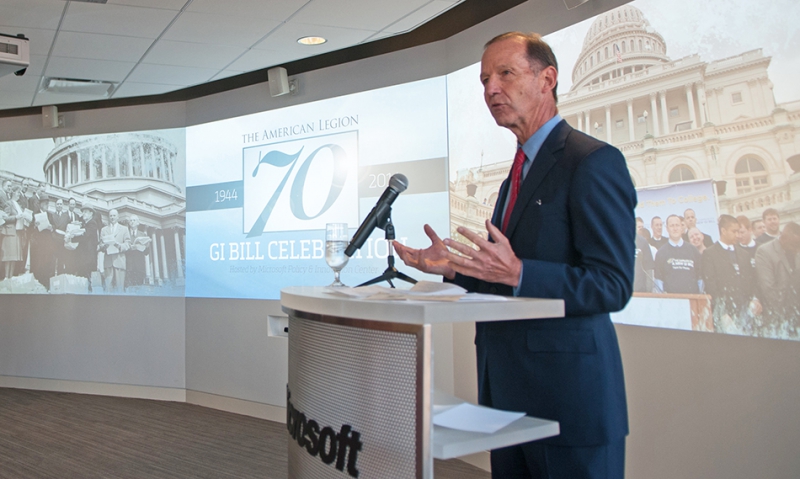 Jon Bellum received his college education in the early 1990s, thanks to the GI Bill. Now, on a daily basis, he sees the impact of the modern version – the Post 9/11 GI Bill.

“One of the driving points of joining the National Guard in the late 1980s was to get the Montgomery GI Bill, which provided a substantial contribution to my tuition, provided me the opportunity to both serve but then also come out of the University of South Dakota without any debt,” said Bellum, senior vice president and provost at Colorado State University - Global Campus. “Now, working with students, our goal is to help them get their education and come out with the least amount of debt. The GI Bill has – at our institution – played an important part in all of that.”

Bellum is among the estimated 20 million American veterans who have received assistance toward education as part of the Servicemen’s Readjustment Act of 1944, the original GI Bill, or the updates that have followed. The legislation – drafted by American Legion Past National Commander Harry Colmery – created the U.S. middle class, revolutioned higher education and dramatically increased home ownership in America.

The bill was signed into law 70 years ago June 22. To honor that landmark anniversary, The American Legion hosted a June 17 celebration gala for around 100 policymakers, veterans and others at the Microsoft Innovation & Policy Center in Washington, D.C.

“That piece of legislation has been called the most important piece of domestic legislation in the history of this country,” Gaytan said. “And it’s true. It created the middle class. It gave this country a backbone to build upon, and you see that in your grandfather’s success, your father’s success … If you do what is right, you will get what you deserve.”

Not only did the GI Bill revolutionize higher education, it made home ownership possible for millions of Americans, said Theodore Roosevelt IV, chairman of The American Legion’s 100th Anniversary Honorary Committee.

“It gave affordable home and business loans," he said. "It democratized American education. And the impact of that is just incalculable. It gave us the middle class, the world’s largest middle class. It precipitated the creation of a thriving, vibrant housing industry. And we, as a nation, have more than two-thirds of our population living in homes that they own. That’s a great achievement that The American Legion and the GI Bill can take some credit for that. “

Looking ahead, Roosevelt pointed out that upcoming demobilizations will mean 1.2 million servicemembers will be returning to civilian life. “And we better make darn sure that we are prepared to give them what they deserve for what they have done for us.”

That’s where the 9/11 GI Bill comes in, which allows veterans to transfer benefits to a spouse or dependent under certain conditions. “I think what is important is how the Legion over the years has kept it as part of every servicemembers’ ability to go to school,” Bellum said. “And now it is an important part of their children’s legacy.”

Keith Howard-Streicher, who served nearly four years in the U.S. Army, is among the recent veterans who have used the GI Bill. He used it to receive his associate’s degree and is now a few credits shy of his bachelor’s degree from American University.