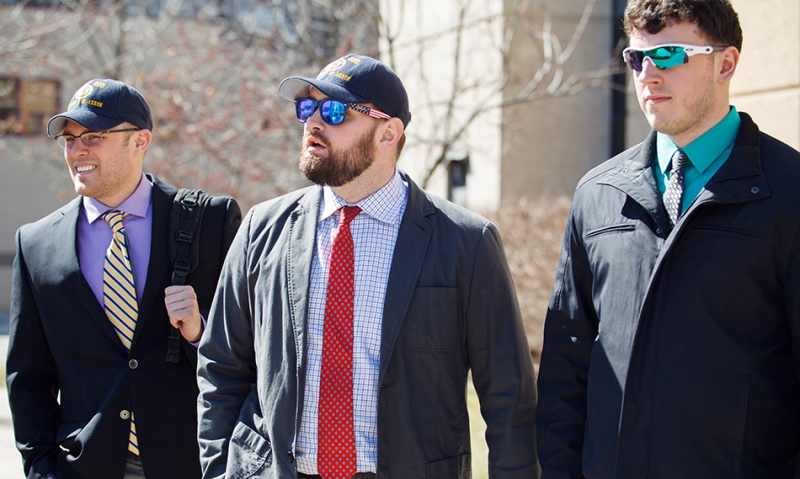 (From left to right) D.J. Douglass, Steven Downey and Tony Stevens of University of Akron Post 808, which provides fellowship and transition assistance to student veterans at the school. (Photo by Alex Slitz)

The Legion’s age-old mantra of veterans helping veterans has found a fitting home at the University of Akron, a modern-day college campus complete with football games, Greek houses and sprawling concourses.

At the school, located in Akron, Ohio, a group of dedicated student veterans have founded University of Akron Post 808, one of the fastest-growing posts in Ohio. The post has thrived thanks to the passion of its 20-something founders and the important niche the post has filled at the school.

Post 808, which started in July of last year, has blossomed to include around 140 members - 110 of whom are student veterans. The remaining members are veterans from the university's alumni and faculty ranks.

These members coalesce together with a goal of providing mentorship, fellowship and career-placement assistance to members and student veterans at the school. Members say they have been able to mold the Legion's founding principles, and its time-honored model of a local post that reaches out to veterans and the community, to help them meet these goals at their school. The succes of these endeavors have made them well known among the student body and administration.

"This post is an evolution for The American Legion," says Post 808 Commander Steven Downey, an Army veteran and senior at the school. "The American Legion started by filling a need that was perfect at the time for World War II veterans coming home. These new veterans need something different: We want mentorship, entrepreneurship, job placement and college degrees. This post is the perfect atmosphere for providing that."

Chief to meeting those needs is the post's mentorship program, which pairs its student members with veterans from the school's faculty and alumni bases to serve as mentors. A student member fills out a questionnaire when he or she joins the post, listing major, branch of service and career interests. The post then works with the university to find a veteran alumnus or faculty member to mentor that veteran.

"We’re able to take a veteran who wants help and connect them with someone who can provide the help that is needed," Downey says.

Post 808 is the brainchild of its adjutant, Jay Musson, who is a Vietnam veteran and fixture on the University of Akron's campus. Musson was a member of a traditional Legion post off the shores of Lake Erie in northern Ohio. It struck him one day that a Legion post would fit well on the campus of his alma mater, which boasts around 1,200 student veterans.

Musson remembered how difficult his transition was back into society after he came home from Vietnam. Those experiences were his impetus for starting Post 808. His family foundation - the Musson Foundation - had already donated $220,000 to build a 21st-century veterans lounge inside the school's new football stadium that gives student veterans a place to socialize, study, watch television, access the Internet and even meet with VA health professionals through an online video chat via VA's "Telehealth" program.

The post, Musson says, can address the needs and obstacles that modern-day student veterans face.

“Being a veteran and coming back from Vietnam to here and really being on my own, I remember that vividly. I don’t want those kids to go through anything like that," Musson says. "(Vietnam) was a whole different war. There are just a lot of administrative hassles that these kids are dealing with now. If I were a student coming back now, I would feel lost among all the benefits: Title this or Title that, or timing issues with receiving money. Those are the things we are trying to overcome."

Musson has enlisted the help of a Legion service officer who is an alumnus of the school. With an eye toward easing transition burdens, post members have also lobbied the university to create a special veterans-only English and composition class, received a spot on the school's Military Veterans Steering Committee, and facilitated a more welcoming environment for student veterans by starting an annual tailgate before a football game that recognizes the post and veterans at the school.

"This is the Legion's mission at work: veterans helping veterans," says D.J. Douglass, a junior at the school and second vice commander. "When you are active-duty military, that’s all you do. That’s what your life is. You learn to love your brothers and sisters and look after them. And now that’s afforded to us again."

Tony Stevens, a sociology major and Post 808 member, joined the post in hopes of finding some of the camaraderie he enjoyed in the military, and also just to be among other students who are near his age and have had similar life experiences.

"You go to class with these kids who are 18 or 19... it is stressful," Stevens says. "When I was their age, I was in Iraq. By my 22nd birthday I was in Afghanistan – quite a different experience than them."

Stevens, an active participant in veterans initiatives, has become the post's sergeant-at-arms. He says the campus post model is something that student veterans at other schools are well-positioned to replicate.

"Hopefully, people around the country can use our post as a model and do what we are doing.," he says. "Veterans have a lot of experience, a lot of stuff to share, and a lot of good to do for people."